“Thanks a lot,” Moira said to no one, standing in the light evening rain, holding the Nice parking job, dumbass! note, which she’d pulled from under the windshield wiper. She walked around the car parked in the grocery store lot,  pulled halfway into the spot, end popping out on the diagonal. Her ex, Trevor, always hated how she parked, her short hair, her nail biting, how she pronounced chocolate (chawklet). What a day, she thought, getting reamed out by Dr. Springer for being two minutes late, dropping a bottle of olive oil in the grocery store, creating a slick in the path of a teetering elderly couple, saved by the mop-wielding grocery store employee just in time. Moira tensed as she turned the ignition. Backing up, she checked and rechecked the rearview mirrors. Her foot tapped the gas then the brake, while the windshield wipers made their rubbery sound–move, stop, move, stop–carefully, so carefully, so as not to offend.

“Thanks a lot,” Moira said in response to the soft-bodied daycare aide’s compliment. Gabe is the nicest boy here, she’d said. Moira nodded absently, wished her goodnight, pushed Gabe’s wheelchair out the door, down the slick ramp, to the car, which was parked only a bit straighter, still slanted. They drove home, Gabe making his happy sounds, little animal yawns. She told him about the bad day at work, the spilled olive oil, the note as they passed through encroaching darkness. Next, she’d get him in the house, fed, changed. They’d watch Jeopardy as she spooned Ben and Jerry’s Chubby Hubby into his hanging mouth, his eyes round with gratitude.

“Thanks a lot,” Moira said the next day, standing in morning sunlight. Mr. Shambly was always nice to her, always asking How’s the family? in his knowing way. He just received the last molar implant and wanted to say thanks for her work, he said. She wasn’t allowed to accept gifts from patients, but Moira kept her eyes down, slipped the envelope into her scrubs’ front pocket.

At closing, she ignored the endless chatter of the younger hygienists planning their happy hours, their weddings, their weekends. She slipped through the office door, headed to pick up Gabe, thinking about the evening ahead. She’d pour herself some white wine, sit down on the couch, open Mr. Shambly’s envelope, see what it was, read his kind words. She’d turn off the television for once,  put on one of her father’s records, Louis Armstrong. She’d enjoy the peaceful Friday night: her son asleep in his bed, a surprise gift, the car sitting perfectly in place, straight in its usual spot. 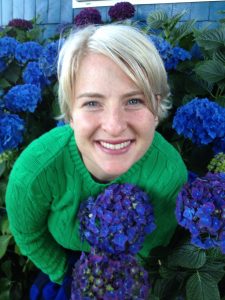 Maggie Nerz Iribarne is 53 and living her writing dream in a yellow house in Syracuse, New York. She writes about teenagers, witches, the very old, bats, cats, priests/nuns, cleaning ladies, runaways, struggling teachers, and neighborhood ghosts, among many other things. She keeps a portfolio of her published work at https://www.maggienerziribarne.com.