The roof rippled in stripes of ruffled cedar, delicate layers of puff pastry. While the windows weren’t grouted in frosting, it had that effect. The front walk wasn’t polka-dotted with gumdrops, but a person got that impression. Pink roses didn’t squirt from a bag of sugar, but they were so well-placed, a man might wonder if he’d wandered into an enchantment. Entrapment. There was no ensnared lover yet, but she wasn’t above it, should the exactly right one happen along.  It wasn’t like catching a rat, where just any wanderer would do. The house had more in common with a plastic toy where only a star-shaped block fit through the star-shaped void. Visitors had to pass her muster, and this Midwestern craftsman was an excellent judge of character.

The physical address was 16 Jubilee Lane in White Hand, Ohio, last house on a deadend, and the only one with direct access to the Maumee River. Mothers didn’t worry, being so close to water, because kids didn’t trespass. The house wouldn’t permit passage. Residents were allowed to come and go: the late Mrs. Delores Gunner  in Unit A, her protege in Unit B. Angelique Lautrec welcomed the occasional guest and frequent packages from UPS. Dolores Gunner allowed the meter reader and someone called “Ghost Man.” He comes for the river, he watches her there at the bend, where she bogs. Mrs. G said this with a mysterious air, in a minty vapor, like a heroine in her spy films. Doomed heroes in a war against time. Under a glowing christmas tree, she snubbed a menthol and turned to Angelique with unsolicited semi-assurance: It’s all gonna be okay, darlin’. Maybe. Probably. Mrs. G rubbed her slippers together. On TV, two gunslingers, black hat, white hat, teamed up to raid a saloon. They shot up the whole town.

The new landlord was a sadist. She called people on the phone.

Meg Gunner said, “Did you cozy up to my mother so you could squat in that house?”

To G’s jerkwater daughter, Angelique wasn’t a reliable long-term tenant but a slimy river nix who squatted over the Maumee’s swampy neck. She did this for a mysterious hobgoblin purpose.

“Don’t correct me, Professor Lautrec. I’m not one of your students.”

“A duplex is two stories, stacked, but we’re side by side.”

“My mother is nowhere. Get a grip.”

Ohio towns, Ohio homes, are often haunted, but hers was missing a ghost.  When Mrs. Gunner died, the enchantment faltered and lookie-loos descended. The listing raved over the riverfront and the heirloom trees, but the Realtor called the house a “complete overhaul.” A more ambitious buyer might prefer a “total teardown” so they could “build high.” The old sunroom didn’t take “full advantage” of the river view. After three days, the Realtor ghosted Meg Gunner. It wasn’t Angelique’s fault. This house had a survival instinct.

Meg said, “It’s you. You’re the problem. You’re worse than my mother.”

Angelique appreciated the house’s innate maximalism, so much so she’d stayed for 14 years. In her grief, she’d gone hog wild. Someone should pry the bedazzler from her hands and make her eat a biscuit. She needed a reining influence, someone on site.

“No renter is gonna want your weirdness. It’s a mess.”

“Hey, this is not a low-key vibe. The doorknobs are engraved with Greek myths.”

The caller said, “My dad died in a gruesome accident at the GM plant. I was grown by then, not paying attention. Mom used the payout to buy that stupid house. ‘A house fit for a fairy.’ Next thing I know my mom is the neighborhood fright. Kids actually called her the Winter Witch.”

In that section of the plant, GM manufactured school buses and pickup trucks. Dave Gunner was a machinist. The experienced manager was attending to a snafu with a stamping machine, meant to perfectly press massive sheets of steel. Gunner was stamped flat by 7,000 pounds of brute force.  No, it was mechanical precision–7000 pounds of piston, well-lubed, that made a comic-book sound with every stamp. Coworkers retired on disability. Witnesses had PTSD, a natural response to seeing a completely flattened man. A person needn’t be into popular physics to understand the horror of the flatlander, too flat to know he was doomed to two dimensions. Humans need to believe they have more mass–more meaning. Coworkers swore that Gunner followed strict protocol. He was a careful man, by all accounts, and some claimed there was no power to the machine.  Mrs. G believed the rumor, but there was more to her theory than unfailing faith in her husband’s efficiency. We got no dang respect between nature-man-machine. So, darlin’, it was bound to happen. It’s happening all over the world. I’m not special.

“I’m so sorry, Meg. No worker should die on the job, especially the way your Dad went.”

“You’re a fool, just like her. You think you’re slumbering under a mushroom cap, but steam-curled shingles are a nightmare. I need to sell now before that albatross starts leaking.”

That roof was the reason Angelique’s financing fell through. The effect was organic and charming, but the process was prohibitively expensive; it was more than Professor Lautrec made in a year. Each shingle was handcut and steamed onsite. When the cedar was warm and wiggly, the artisan laid it down in fungal waves, layered like crepes.  Underneath, in the triangular eves, tessellated stained glass cast rainbows high on the interior walls.

The caller said, “She kept her Christmas tree up year-round, ya know.”

Angelique missed that always twinkling tree, but her magic was another daughter’s trauma.

“You are quite literally scaring them away, OK? Get rid of the impaled baby dolls!”

The gingerbread house should be beautiful, always, but Angelique didn’t mind their fear. It was a comfort to her when visitors hesitated at the door, wary of licorice snares. Pizza guys called from the gate, afraid to mount the mirrored stairs. People should enjoy this magic from afar but they should never knock to request a tour. Do not steal gumdrops or gluey trinkets. Don’t pluck feathers or disturb altars. Don’t loiter, peek or creep. There would be a price to pay for mischief.

In the sunroom, red polka-dots bobbed on warm plaster. The stained-glass tree had three-dimensional apples, marbles made locally at Libbey Glass. Morning light crossed the river and entered the house through tiny balls of ruby glass. The cottage extended into the back of the large lot, with a beautiful view of the island that divided the river. On the other side of the back gate, on a murky band of riverbank, a ginkgo competed with a weeping willow for resources.

The house needed some doctoring. Plumbing was old. The toilet sneezed. The shower gurgled and spit. Angel toweled dry and dressed. She wore wide-legged Hawaiian-print palazzo pants, a primo example of 1970s resort wear.  A cropped T-shirt was screened with a vintage book cover: Hansel and Gretel took refuge beneath a peppermint light post. Gretel was a chubby redhead munching on cookie shingles; like Angel, she was also the pointy hat in the attic window.

Angelique fashioned a hand-glittered “For Lease” sign to hang from the front fence.  While out there, she thought to refill the toy machine. It was lower than usual. Each capsule contained a token, a bibbity-bob. She collected random ephemera on long walks: unfurled tongue of a pinecone; dead bumblebee; neglected Tamagotchi. Every plastic capsule came with a handwritten fortune.  She knew her customers only by feel. She rarely caught them in the act, but capsules disappeared and the bank filled with coins. She imagined it was mostly omen-seekers and lovestruck teenagers, the types of people who still had hope.

There were occasional offerings: a note with the rest of the story or a child’s crayon drawing. One organized regular left a twine-handled sack of empty capsules and an accordion file with color-sorted findings. Red-brown acorn cap. Yellow Lego. Orange butterfly wing. Purple seaglass.

A ginkgo leaf, recently plucked, was planted in the coin slot. One broad fan of bright green, like a love letter. She looked toward the river. She extended her fingers, thinking of Pretty Woman. Julia Roberts is reaching for the jewelry box when it snaps at her like a turtle. She squeals with embarrassing delight. There’s another scene, a similar thing, with a snail shell or an oyster. She’s wrenching her way into some closed-up organism.  The man doesn’t want to let her in but too bad because she listens to Prince in the bathtub. She is irresistible. Angelique smiled and another right after, then a third, piled up smiles. Plastic capsules jumbled into the glass globe, pop-pop-pop on top of each other. 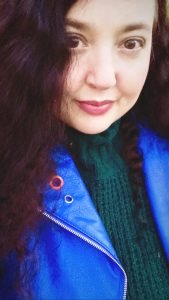