Simon tossed me the rabbit he’d shot as we climbed the steep slope up from the combe. I caught it by its hind legs as he thrust the butt of the rifle into his shoulder. Took aim.

On the verge, close to a dry stone wall, a sheep lay on its back. Its rectangular pupils stared up at us like blacked-out windows.

“What the fuck you doing?” Words left my mouth like the rusty nails I’d been pulling from planks since lunch.

“Things riggweltered. Playing dead,” he said. “Must’ve scared it when I shot the rabbit.”

I knocked his barrel off target as he fired so the bullet bore into the grass, not the sheep. He laughed and pressed his boot into the sheep’s thick mud-matted coat, ragged where patches of wool had shed as winter gave way to spring.

I dropped to my haunches, put my hands under the sheep’s body, and rolled it until it was on its front. The animal struggled to its feet and trotted unsteadily up the knoll.

“Better get back so my mother can do something tasty with this rabbit,” he said.

I drew so close Simon’s beard tickled my lips. “Why’d you do that? Poor thing’s ears must be ringing.”

“You could do with a shave,” I whispered. “Coward.”

His hand guided my fingers slowly to his mouth. His lips warm but dry.

“Watch me fight like a man when I join up.” He threw my hand from his mouth like a spent cigarette. “See then who’s the coward.”

I was 16 and Simon 17, but officials asked no questions when we presented ourselves at the local recruitment office. So we spent July charging sandbags with bayonets before they shipped us off to France to dig trenches and play cards. This wasn’t what Simon dreamed war would be. Whenever I touched him, he shrugged me off and once hit me so hard in the face I had to explain my bleeding nose with a story about stepping on the blade of my shovel and the shaft smacking me in the face. Gone were our dark-corner kisses, stolen whenever his father paid me to help with some filthy job cleaning out his barns.

One morning, in the trench during a lull between shelling, Simon locked me in his green, watery eyes, sprang to the ladder, climbed out of the trench and hurled his long limbs into no-man’s-land. I followed, protected from a shower of German bullets by his stumbling body. I rolled into a ditch and waited for the relentless machine gun fire to cease.

As men shrieked and moaned about me and guns tore any chance of peace to threads, I wondered if Simon might still be alive. Lying, like me, in some shell hole.

When a group of German soldiers emerged from the drifting smoke, I widened my gaze and fixed it on a fallen helmet riddled with bullet holes. One stooped over me, so I deadened my stare further and focused on a faraway cloud. The morning sun was wearing away at its shifting outline, and it soon transformed into Simon’s determined expression. The dark lines on his furrowed brow lightened before the sun broke from the muting clouds.

I remained slumped in a puddle of blood and mud until the men’s cries faded and the guns abated. Liquid had leaked into my open mouth and formed a bitter-tasting pool inside my right cheek. Something warm and wet pressed into the nape of my neck, followed by a rough tongue across my face, which reeked like rotten tripe.

A brown, thick-coated beast stepped into view. Turned from me. At first, I thought it was a dog scouring the battlefield with its owner, a rifle loaded with put-down bullets for the almost dead.

The creature opened its mouth and let out a strangled Baa, turned, and trotted forward until it stood over my body. Then it shoved its nose into my face, more like a truffling pig than a sheep, clearly not a dog.

I pushed it away and rolled through soft clag until I met something solid. Simon. His face bleached of its usual ruddy hue and divided by a streak of blood running from his forehead to his chin, dried black by the stiffening breeze.

I resumed my faraway stare. The sun flattened a figure above me, its finer features lost, leaving the silhouette of a soldier with a muzzle of a rifle aimed at me. Something heavy landed on my shoulder blade; it rocked me back and forth like a baby.

Another figure emerged, leaned toward the other, and pushed the gun’s aim off target, sending a bullet close to my ear. I watched until the sunlight absorbed their dark, departing bodies.

When I attempted to stand, my legs buckled. I collapsed onto my hands and knees, then crawled out of the ditch and across land, now clear of corpses, spent shells, and rolls of barbed wire. Long grass billowed under a cloudless sky. Terrified the boundless green would return to clag and barbed wire, I crawled until a sheep appeared, sandwiched between the blue sky and rolling hills.

It lifted its lower jaw before dropping its head and ripping a mouthful of long-stemmed grass and chewing. Beads of water glistened on the edge of one blade. I tried to speak, but the words died in my mouth. I hungered for the tender grass. Tore at it, and we went on eating until we’d cleared the small hill, and only one blade remained. I pinched the last succulent shoot between my teeth and allowed the sheep to latch onto the other end. Then I opened my mouth until its mushroomy lips met mine. 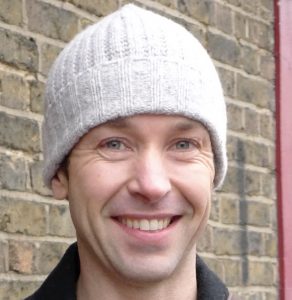 Paul Attmere is an actor and writer. Originally from the UK, he now lives with his family in Krakes, a small town in Lithuania. He’s been published in Spread the Word – Flight Journal, Running Wild Press Short Story Anthology, The Disappointed Housewife, Sixfold Anthology, and Litro Magazine.