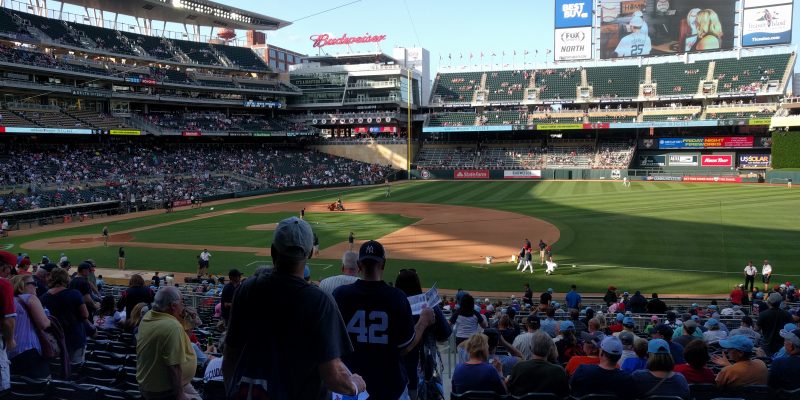 You shuffle with the walker as I guide you past the barkers selling hats and yearbooks, home-team t-shirts, a first beer. Alongside us, a green where kids are trying to zip the ball from a mound into the strike-zone hole by the plate. We might have done that once. Now, it’s a long and aching journey to the seats and you need to stop and rest several times. I scan the concessions so I can offer you options. Pizza? (I hope not; already your orange shirt is stained with french fry remains from lunch.) Cheesesteak sandwich? Burger? I don’t bother with the Indian buffet or the hummus cart, which would be my choices if I hadn’t chosen to save some bucks and eat before I got here. You were also supposed to eat, but the home was serving chili and you hate chili. So you ask me for cheesesteak. I settle you into the seat and leave you there, hoping I can get back before the game starts.

The sandwich looks like diarrhea—loose chunks of gray meat covered with light orange cheese spilling over the sides of the bread. I make sure to take several napkins even though the holders have “Save a Tree” signs. They’re just announcing The Star-Spangled Banner and I think about going down on a knee in solidarity with Colin Kaepernick, but I stand with the rest of the crowd because I don’t want to start a scene. Next to me you’re singing with diva passion, croaky and off-pitch, the way you used to sing in the living room with the amp turned up so high the neighbors complained. Yesterday, I took you to see that movie about the kid who makes it big plagiarizing Beatles songs in an alternative world where Beatles songs had been forgotten. “That’s my fantasy,” you gurgled, when the guy stepped out onto the rooftop stage to sing “Help” to the screaming crowd.

I can’t stand watching the cheesesteak dripping onto your shirt, so I hand you the napkins and keep my eyes on your face, which is like our mother’s, broad with cheeks that look like kangaroo pouches. I was always happy I’d inherited Dad’s narrow, more angular look. Baseball is our common language, so I start the banter. Sabathia’s pitching against someone I’ve never heard of, but he’s getting old, less effective, right? You grunt in response, the crust falling onto your lap as you loll into a snooze. I should wipe it all away, clean you up, but I don’t. I turn my attention to the field and watch alone. The first two batters walk. The next hits a ground ball to third, a quick around-the-bases triple play. I’ve never seen one live. The crowd roars, and you open your eyes. “Triple play!” I shout. You look dazed as you turn to the video replay. “I can’t see it. The cataracts,” you say.

The game is a slugfest. Lots of runners. Lots of shots over the wall. You startle with the crowd’s noise, but mostly you doze, singing under your breath. Can people really sing when sleeping, or is this a fuzzy in-between state, a place you’d rather be? I think about all the places I’d rather be—maybe even cleaning the toilet. As much as I used to love baseball and still feel caught up in the camaraderie of cheering for winners over losers, I feel short of breath, small inside myself whenever I’m with you, even though you’re the one with all the nameable problems. We both know what this goes back to, the day we don’t discuss. I settle into my role of good sister as the sky darkens.

In the bottom of the fifth there’s another long blast into the upper deck. The crowd screams. “I saw that one!” You wake up and grab my hand. I try to swallow down the bile that’s rising in my throat. Just a hand in mine, I tell myself. Nothing like before. You live without touch and everyone craves touch. But this is not one of those “have-to” hug-and-kiss greetings where you went for my lips and I quickly turned my cheek. Didn’t Jesus say, “turn the other cheek?” But Jesus was talking about forgiveness, not turning away. I think there’s something in the Bible about not forsaking one’s brother, but I don’t know because I haven’t read the Bible. The Bible is also full of men raping women.

Anyway, we’re at the game, so I don’t need to think about Jesus, though I do wonder about all these fans here with their palms pressed together, praying to God or Jesus that the next batter will strike out or a hit a home run depending on which side they think God or Jesus is on. I don’t care who wins anymore. I take my hand back. There’s a loud cheer as a ball sails deep into right field then curves to the wrong side of the pole, foul.

“You always got As,” you say. “And I got unsatisfactories.”

“You spent all your time in the hall.” I’m making my voice deliberately light, because this was more than 50 years ago and who cares. They would always send the bad boys to the hall and I would see you every time I left class, shirt unraveled, tie half off the collar, grinning as you reached out to try to pinch me. Then, later, that mop of hair, the undershirt, the cool, pre-drug look, like how I always remember you in that photo before the first hospitalization, sitting on the front steps, which were brick with an iron railing. The red door behind us. And behind that, the dark halls leading home to the hours in front of the TV watching the miracle Mets of 1969. And of course, the countless games at the ballpark, where tickets were cheap if you sat in the upper deck, and the wiffle ball games in our concrete backyard, where it was so easy (for you, not me—I always struck out) to hit one over the fence that separated us from the abandoned building next door. When I didn’t want to tell our parents about forays into the worlds of marijuana or boyfriends, or what you did to me, I’d talk about standings, the All-Star ballot, who was in line for the Cy Young.

It’s the seventh inning now and you’re snoozing again, chin drooping into the cheese on the neck of your orange shirt. The opposing team gets a couple of runners on. Then a reliever comes and strikes out the side. The crowd roars at the final swing and miss, and I catch the excitement. “Strike three!” I yell. You bolt awake.

“I’m going to make it through the game,” you smile, so proud of yourself, not acknowledging or caring that you missed the action. You smell like urine, a side effect of dialysis. A man comes by selling beer. “Nine dollars! That’s crazy!” you say. “Remember when we could pay $1.30 for a ticket?”

“Yup.” My preteen girlfriends and I used to joke about buying the peanut boys for 50¢, the number on the button they wore, but I don’t tell you this. Lewdness has no home between us.

“I could have gotten married,” you say. “Maybe I could still get married.”

Delusions? Yes. Psychotic? Not right now. Just a wish. Is it fair to deprive you of a wish?

“Que sera, sera,” I say. And you launch into song again. A croaky Doris Day croon that fails in drowning the bugle charge as the home team comes out again to bat.

D. Dina Friedman has received two Pushcart Prize nominations and has published in many literary journals. She is the author of two award-winning novels, Escaping into the Night (Simon and Schuster) and Playing Dad’s Song (Farrar, Straus, Giroux), and one poetry chapbook, Wolf in the Suitcase (Finishing Line Press). See more: http://www.ddinafriedman.com.