Today is Jane’s thirty-fourth birthday, and it’s her first birthday as the oldest person on the planet, or so we speculate, sometimes joking, sometimes not. “Happy Birthday,” I said to her, say to her, will say as many times as I can before the day ends. When I say those words, I mean them, and I don’t mean them. What I mean is: I love you, and I hope today is wonderful. What I don’t mean is: You’re only thirty-four, and you’re probably going to die this year, like you probably should have died last year and the year before. Waiting for a beautiful, vital person—a person so loved—to die year after year is excruciating. I wait for the worst, expect it every day.

I make four teas for the two of us, boiling the water in a pan over a fire in this house’s kitchen’s old-timey stove, pouring the boiling water into the four identical mugs, the mugs that hold the exact same tea, two of the mugs also holding the dust of many tranquilizers, potent enough—I hope, I’m ninety-nine percent sure—to kill anyone who drinks it. I also pull a box of Little Debbie Cosmic Brownies from the back of the pantry. We still have some nonperishable treats saved for special occasions.

I put the two mugs I want—along with a couple of small plates, forks, and napkins—on a decorative, silver tray that was covered in dust an hour ago, and, in the center of the tray, two plastic-wrapped brownies.

Jane is on the couch reading, but she’s also waiting for me. She always reads in the in-between moments. Like if she’s waiting for something or has nothing to do for ten minutes or is bored, she reads. It’s a quality that is charming and infuriating at the same time. I set the tray with the tea and the brownies down on the coffee table. The dull glow of thirty-four candles provides a romantic aura to the room. Jane stretches an arm forward, eyes remaining on her book, and grabs her mug, brings it to her lips. She slurps the tea, and she sighs, a very satisfied
grunt escaping her.

“How’s the book?” I ask. I know her answer already.

“Once again, awful. No matter how many times you swear on it, and I read it at your urging, no matter how many people agree with you that it’s one of the all-time classics, I’ll never see it. Mersault so openly, angrily embracing death. It’s so forced, so fatalistic. And don’t come back with that ‘when faced with the absurd’ bit you always use.”

“You’re so dramatic,” I say, and, “It’s not about the dying.” It’s about the confusion, I think. “Shouldn’t you be reading something a little cheerier on your birthday, though?”

“I like trying to understand you better,” Jane says. “You haven’t touched your tea. It’ll get cold.”

Jane and I met when I was twenty-six; she was an even thirty—right at the scary age. A couple of years before we met, they proved everyone was dying. They proved the lifespan of lifespans declined at an exponential rate. Due to mass, environmental poisoning, they said, vaguely. At my younger sister’s wedding, I approached Jane, and we danced all night. I got lost in a sparkle in her almond-shaped, almond-colored eyes.

Later, we left together. Jane pressed me against my car, and I kissed her. She squeezed me. We were covered in sweat; it trickled down my armpits. Jane’s yellow dress took on a transparency, and her nipples stood distinct against the fabric. Rain sprinkles fell on our heads, like a slow-motion version of the fans at amusement parks that spray mist. It cooled us.

“Thirty,” Jane said, her eyes glowing like they do.

“I know,” she responded.

I sing the Happy Birthday song to Jane, mostly as a sardonic joke, and we both find it hilarious. I have an awful singing voice, so whenever the occasion arises that I feel so compelled, I fake an operatic warble. Jane laughs a very genuine laugh most times I sing with the voice, so it’s always worth it.

Everything went dark well before anyone expected. I possess a memory from that day, one I cling to, surprisingly fond of. We went to a pharmacy; we thought it the wisest place to stock up. I grabbed a cart and told Jane to get in, rolling her up and down the aisles, grabbing everything we needed and then some, raising hell and behaving exactly as we wanted. That same trip, I found the tranquilizers. I’ve always been the more cynical of us.

“Was there ever a point in your life you liked those?” I ask.

“No, they’re so disgusting, but sugar’s sugar, and I love sugar.”

Jane offers me her second birthday treat like the most disciplined messianic figure. She grabs it off the tray, extending it toward me in a sacred, open palm.

We silently savor our Cosmic Brownies, and when we’re finished, Jane raises her mug. “Cheers,” she says. And I clink my mug against hers, and we both drink.

The one thing I know I’ll regret after Jane dies is that we never married. It took us about six months to truly fall in love, the kind of love that makes someone your closest family, that makes it impossible to imagine a day without them, that kind of love. Shortly after the real love kicked in, life became utterly not normal. Sure, we could have fake-married. Jane often asks for my hand in fake marriage.

“Look how gorgeous that old tree is. We should exchange vows under it and come back for a visit every year.”

“The next church we see, let’s get married in it.”

“Will you marry me?” I’ve probably heard that classic a million times.

It became more of a joke over time, and we’re still not married, fake or otherwise.

“What was the best thing about your thirty-third year?” I ask.

My legs cover her legs on the couch, and I rub her right quad. We’re winding down now. She rubs a hand against her temple, circular motions, a gesture of serious thought. “It may not answer your question exactly, but I appreciated more than anything that you continue keeping track of the days, so we can do things like celebrate birthdays and Christmas.”

“You kiss-ass,” I say and tickle her side.

She laughs. “I mean it. I think it’s the only way anything feels normal.”

“Wanna head to bed?” I ask, arching my eyebrows, looking up at her, insinuating, looking dumb.

She jumps off the couch, and my legs fly to the side. We both laugh. “No time like the present,” she says.

The house we’re in now doesn’t seem like it was ever too lived in. It’s really nice. The bed has a memory foam mattress—the most comfortable thing I’ve ever slept or fucked on.

I lie next to Jane, gazing at her sleeping smile and considering scenarios. One scenario: We drank the tea with the tranquilizers and soon our bodies will be peacefully entwined, naked and cold on the memory foam. Or, I make four teas all the time; I want to poison us but can’t. Or, I never had tranquilizers in the first place—the super-powered tranquilizer being a manifestation of my ideations. Or, even with the tranquilizers accessible, every day with Jane is too good. It could be that I know I chose this path, and I will let it play out as it does, and I’d be an idiot not to, whether it’s another three months, a half a year, a year, two years; who knows? 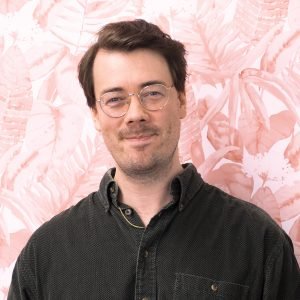 Taylor James holds an MFA in Creative Writing from Vermont College of Fine Arts. He lives in St. Louis, Missouri, and his favorite cocktail is a daiquiri.