A.D. Carr Reads "What I Think When People Ask 'How Are You'"

What I Think About When People Ask “How Are You”

In the dream, I am somewhere in public, with friends—a couple from our social circle. In the history of the dream (not in real life), the woman, my age, mother of three, had been pregnant with her fourth. But in the present of the dream she has a flat tummy. I ask her what happened. She tells me she miscarried. Late. A stillbirth, I guess, at that stage. My stomach churns. “I want to hug you,” I say. “But we aren’t allowed to be closer than 6 feet.” “You can hug me anyway,” she says. We hold each other for a long, long time. I wake feeling mournful.

That was on day eight, I think, of this slower, smaller life. For weeks now, my husband and I have been passing our toddler back and forth like a relay baton and he, the toddler, is losing patience. In the mornings, after his breakfast, he crashes into the bedroom to wake whichever parent has enjoyed the extra hour of sleep, and lunch is announced when his little fingers curl around the edge of the closed pocket door that leans slightly backward, off its track, separating the office from the kitchen. A little eyeball peeks through the gap. “Da!”—which in this context means either mom or dad, whoever is hunched at the desk.

He is too young to know what’s going on, only that there are no people his age here, that the world, for him, now ends at the edge of the grass, and that his mom and dad raise their voices when he pulls the dog’s tail. He is bursting with bored energy, while his father and I are doing everything we can just to get to the end of the day without breaking. We find tedious chores to fixate upon alone, deriving small but sustainable (for now) solace from the muscle memory of folding laundry, weeding beds.

In the evenings, after bath and books and bedtime, we grasp at rituals from Before. Maybe we throw darts in the garage, keeping score on the concrete with half-spent colored chalks. Maybe we build a fire in the fire pit. Maybe we Zoom with friends. Maybe we watch Top Chef.

One afternoon I’m in the front yard with the boy, who finds indescribable delight in every mundane discovery. He brings me blades of fresh grass, pieces of mulch, twigs sloughed by the towering oak. “Da!” he says, which in this context means “Look!” “I see,” I tell him. “This is a stick. This is an acorn. Please don’t eat that.” He wanders around, stooping every few yards to inspect the ground beneath his feet. I passively scroll my phone until his movement stops. I look at him. He faces the street, transfixed. I follow his gaze up the hill. An old woman out for a walk. She waves as she passes, and his head follows her until she rounds the corner. Fifteen minutes later, he spots her again. She notices him noticing her, slows her pace. “Hi,” she says to him from a distance. “I’m Rita.” He is motionless. How many days has it been since he’s seen another person? Maybe sixteen. Maybe thirty. Rita moves on, and he tries to follow her. I grab him before he walks into the street, and he starts to cry, reaching for her. “Da!” Pick me up.

They say kids are resilient, that the most important thing is that they know they are loved, that he will be okay. Will he? Will I? The number of dead is rising at an almost incomprehensible clip, and every time I cover my mouth and nose with my running gaiter to go into a store, I have what I think is a mild panic attack. What will I tell him about this world when he’s big enough to ask?

“I wonder if you are both women,” my therapist says. “In the dream.” I’m sitting in the car, parked in the driveway, tucked under a blanket. It is the 35th day, and spring has been slow to arrive. To hear her here, beamed through the car’s speakers, lends a supernatural quality to her counsel. Overcome, I blink back tears, focus on my breath. “Maybe,” I say, after some time. We sit together—apart—in the surrounding silence, which is something she is very good at and something I am learning to do.

A.D. Carr is Associate Professor of Rhetoric at Coe College in Cedar Rapids, Iowa. Her creative work has appeared previously in The Rumpus and Quail Bell Magazine. She tweets: @hors_doeuvre. 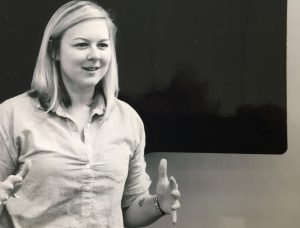