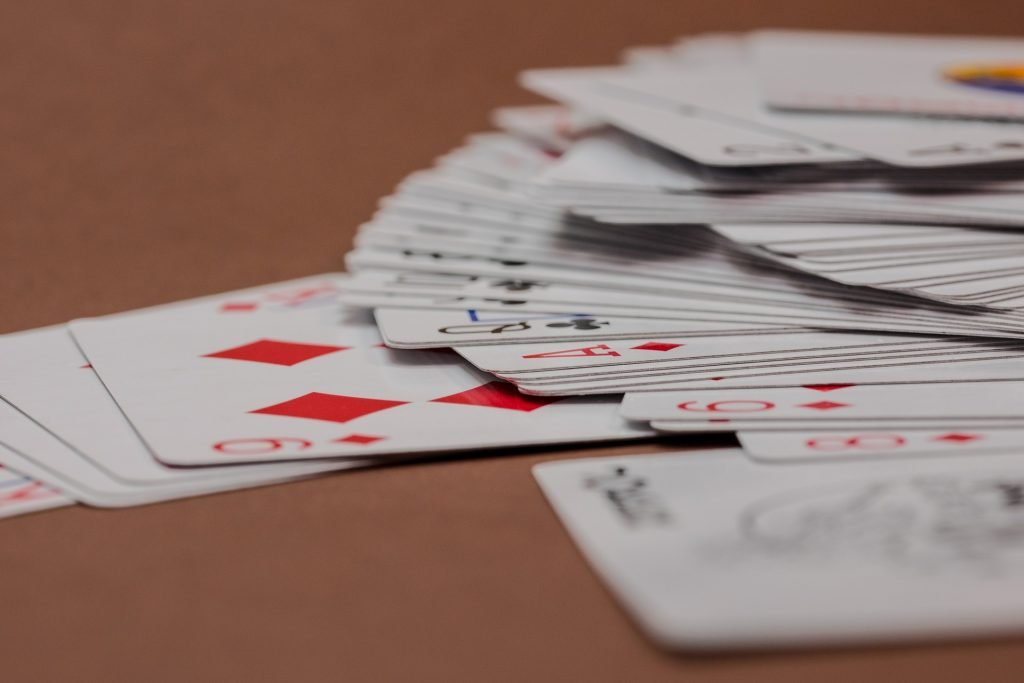 I’ve spent hours playing solitaire since lockdown. I sit on a low-backed chair or a spidery hammock, dragging red cards over black cards with my thumb. The goal is always to arrange all thirteen cards of each suit from ace to king. Four aces create the foundation, and from there you stack families of cards in ascending order.

Sometimes I go analog, but the cards are a slower way to take inventory. I like how the mobile apps are faster, and most reward you with pixelated fireworks or digital confetti at the end.

If I lose several games in a row, it feels like everything in the universe is totally fucked. Each hand I win, I try to pay attention to the last card and free associate until what I’m looking at makes sense. For example, I finished on the 8 of hearts twice today. Hearts pump blood and bring life. Cups1 are vessels to be filled. Eights suggest a challenge or karmic disruption—a sideways infinity.

When it’s hot enough outside to make my brain feel smooth, the app melts to the surface of my screen—a spectral tableau to be played out again, later. When a neighbor died of COVID-19, a hearse from Moore, or maybe it was Stanleys, parked in front of my apartment building in Tulsa. I used to think of things as left or right, but now I see in black and red, a kind of Tetris effect.

A thunderstorm brings Mammatus clouds toward the end of April. They look like beautiful healthy butts in the evening sky. These clouds form when updrafts of moisture-rich air begin to spread out. The water droplets weigh more than the air, and so they sink toward the bottom of the cloud, forming pouches of drooping puffs.

I continue to play patience games on my phone. With solitaire, I can usually tell within 20 seconds whether or not I’m going to lose—too many red cards, not any aces, etc. My best time to win is around one minute. In under nine minutes, I can win a handful of lonely hands.

Sometimes my loneliness is sharp and bitter. I hate Derek Chauvin; I hate Jeffrey Epstein; I hate Donald Trump.

When it’s hard to stay awake, I play solitaire by myself: every evening, I shuffle the deck and struggle to make connections.

I tend to stack too many of one suit too early on, limiting my future options. I try “worrying back,” which is a type of logic gymnastics where you pull a card already built into the foundation back into a tableau column. Worrying back works sometimes, but it’s always a last-ditch effort. Serious players consider this an illegal grace. It doesn’t work, so I give up—what else can you do when you run out of moves?

Trump held a desultory indoor rally in Tulsa on June 20. Of course, I stayed home and solitaired. I also looked at the internet (a lot). I worried about my friends and neighbors who were most vulnerable.

You rarely remember how difficult the game can be when a deal is working out. As I shuffle, the suicide king jumps out of the deck. I catch it like a spiraling football, with a tightness in my chest. It feels like bad luck. As if the world is 8 billion games of solitaire, each experiencing itself subjectively. As if nature isn’t multiplayer chaos, a hostile payoff matrix. I decide to go to the liquor store.

There, a black man ahead of me in line doesn’t have enough money. The white cashier doesn’t seem to mind he isn’t wearing a mask, but can’t give him a break on the change. The person six feet in front of me awkwardly donates the loose coins from their pocket. It’s the first time I’ve been out since March, and everything overwhelms me.

Back at home, I’m trying another card. I tell the app to reshuffle again and again. From the ace of diamonds, I intuit that white debts are heavy because reparations aren’t pocket change. Eventually, I trigger the predictable, celebratory cascade: cards stream across my phone in ordered chaos. I feel lucky. I hate myself.

1The four suits of a standard 52-card deck evolved from gypsy divination symbols: hearts were cups, spades were swords, clubs were wands, and diamonds were coins or pentacles.

Kathryn Parkman is a writer and editor based in Tulsa, Oklahoma. Her work has appeared in This Land Press, The Tulsa Voice, ConsumerAffairs, and other publications. 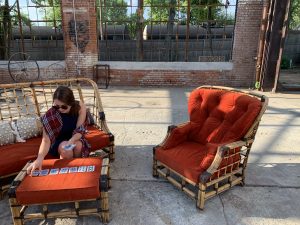