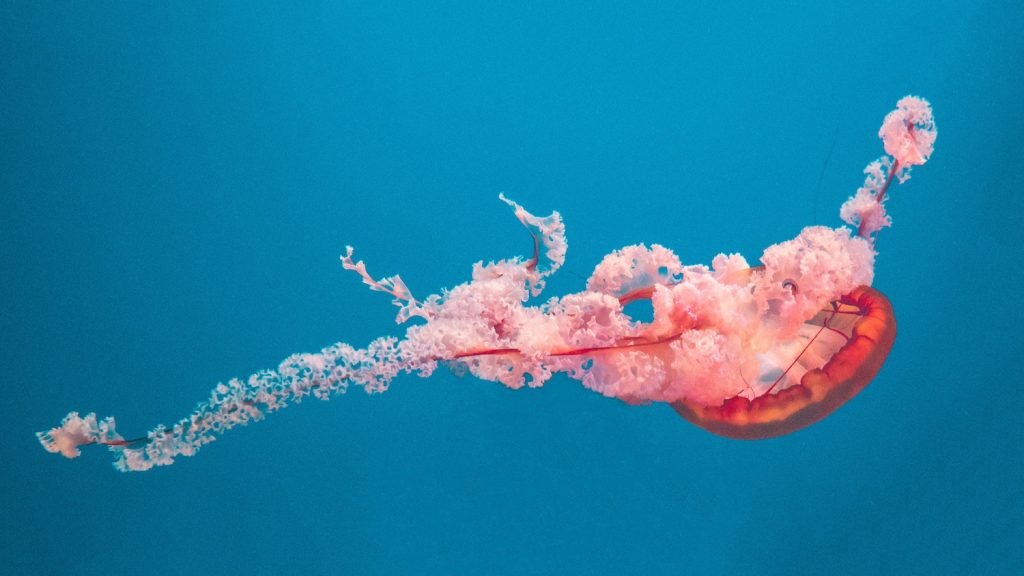 Long ago, lion’s mane jellyfish remained far offshore, but things have changed. It’s believed the troubles began with one jellyfish at a tiny but crowded New Hampshire beach one warm summer afternoon.

“The thing was the size of a Thanksgiving turkey. Thirty pounds at least. Its tentacles were probably 150 feet long or more,” the head lifeguard, Stu, had told the sunburned news anchorman.

After it washed ashore, Stu felt the need to keep kids attending the local summer camp safe from harm. They had formed a circle around the thing. They pointed and poked at it as Stu ran to his stand to retrieve his beachcombing shovel.

“Get out of the way!” Stu shouted, sprinting through the hot sand toward the children. “Let me at it.”

Most of the kids obeyed his command and jumped back. Some splashed their way into the water. He heard laughter.

Stu figured it would be best to carry the jellyfish into the water in order to give it a chance to float away. He dug the tip of his shovel into the sand under the body and lifted it. “It was heavier than hell,” Stu described.

A wave crashed. To this day, Stu thinks the force of the water is what caused it.

“I didn’t know they could break apart like that,” Stu shared. “Before I knew it, the wave receded and bits of the jellyfish floated away and people everywhere were screaming about being stung. I must have pierced it with the prongs of the shovel. I didn’t do it on purpose.”

All 78 people who’d been stung were given the same advice: use vinegar to help with the burn. Seventeen of the victims were children. They were given Popsicles and told not to worry. The burning sensation would subside.

About a week later, one of the boys noticed the sting on his arm had changed. It was no longer a simple red mark; it had turned into something like plastic. It was pliable. Hard. Shiny. Like one of his toys.

Within another week, the plastic had stretched down his arm and made its way up the other. Every limb hardened. Start to finish, it took about a month, but every sting victim’s body stiffened.

Within the month, all over New England people began fusing to plastic objects as they touched them: lips to straws, fingers to Tupperware, hands to plastic grocery bags.

By mid-September the CDC claimed it had likely become sexually transmittable, and by December the disease people had begun to call “The Plastic” was airborne.

People as far away as Italy, Germany, Japan, South America, and Africa had begun showing symptoms.

There were two possible conclusions: either the ocean had adapted after housing so much human plastic waste, or it was a type of jellyfish evolution. A fluke.

There is no known cure.

Amy Braun’s published works: “A Passing Glimpse” in The Heart of New England magazine; “Solstice Saturday” at ESSAYDAILY.org; “Rare Coins in a Red Bucket” and ”Hospice Holiday” in The Herald of Randolph (acknowledged in the newspaper’s holiday contest); and “Vanilla” in Brilliant Flash Fiction. Two of her original plays have been performed.