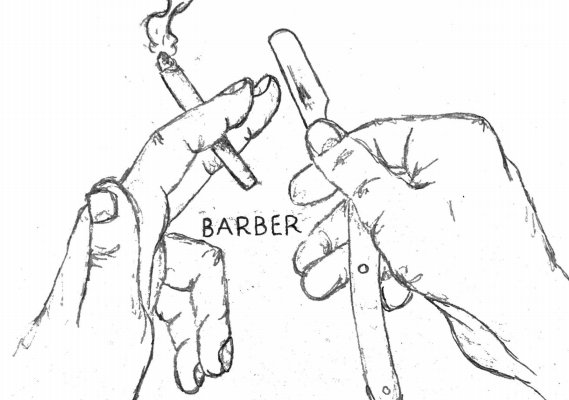 I arrive early, as always. He sees me, ignores me, goes out for a smoke, comes back in, sips something that smells like not just coffee from a light-blue thermos. He wanders over to the list where I’ve written my name. It’s three-fifteen; he looks down at the sheet, calls on me and looks around to see who claims the name he’s grumbled though his wonderful ashtray mouth. I raise my hand halfway and squeak that it’s me who he’s summoned, I am the chosen one, his chosen one. He looks at me like we’ve never met, even though he’s been cutting my hair for about a year now. He extends a hand that’s surprisingly soft. On the space between his thumb and index finger he has a tattoo of a cross. I shake his hand, he leads me to his chair, and the romance begins.

His chair is black cracking leather with holes showing the yellow foam inside. The chair’s frame is made of a smudged silver and it squeals as it turns, with me in it, turning to face myself in the mirror. He asks what I want, and I try not to say you. I tell him, the same as I always do: Just a little off the top, shorter on the sides. But my hair is already short, too short for my taste, but I keep coming here to sit in his chair, my visits becoming more frequent. At first I came once a month, then every two weeks. Now I come once a week and am fighting the urge to come more often than that. I ask how his day is going; he mumbles a reply. The electric razor seems to buzz at the same frequency as my heart as he puts the shielded blade against the back of my head. Our empty conversation fades into silence as the machine vibrates in his hand.

He is soft when he cuts hair. I can smell the tobacco on his hands. He must roll his own cigarettes, because when his hands pass my eyes I can see the brown stains on his fingertips and the ground bits of leaf beneath his unpainted nails. I sit in silence as he moves his hands about, clipping and cutting and snipping and caressing my head and my hair and the back of my neck. For those moments, the twenty short minutes of time we spend together, I am his canvas and he treats me with care, with gentle touches; I am his proud creation, I am beaming with his hard work. I wear it for the world to see: look what he has made me, I say in silence to everybody I meet.

He trims my beard. His fingers move up and down my cheeks. This is his passion, and these little movements, these touches, which feel more intimate than they should, are why I come here more than I need to. I would let him work his magic on me until there was no hair left, and then I would grow it back just for him. As he carefully circles my lips with the razor, a glint in his hazel eyes, I wish I were a werewolf so he would always have something to cut. I almost whisper to this to him, that I will forever be his canvas, howling in the moonlight; I will change just for him; I will wait obediently in this leather chair and try not to claw it up.

But it’s almost over. He brushes hair from my forehead and my nose, and his touch reminds me of when my dad would bathe me in the sink when I was a child, a memory I’m not sure is a memory or just a recollection of a story I’ve heard too many times. But this is real—he is real. He puts shaving cream on the back of my neck, on the edges of my cheeks, below my beard line. He flips open the straight razor, its glint lightning and my breath the thunder that follows. He’ll try not to cut me, he jokes. I laugh too loud even though I’ve heard that joke every time I get a haircut, even though I know he won’t—he is too careful. I like that he could draw my blood but chooses not to. The razor scrapes my skin. I like the sting; I know there is no blood and I know he is taking the greatest care, slicing each individual hair with a bit-tongue intensity. He shaves my throat, and my blood is throbbing lava. I can feel my heartbeat in my ears and the cold steel of the blade at my neck. I dare not breathe. He leans forward and I can smell the cigarettes and the whiskey and the coffee on his breath. I can feel his half-rolled flannel sleeve brush against my shoulder. It’s all over too soon and he snaps the razor shut, spins the chair, and I get up. I tip him more than necessary but don’t say thank you. I nod as I step through the glass door. There is no goodbye, but there never is; maybe next week he will remember my name. 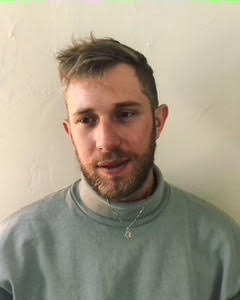 Alexander Shalom Joseph’s poetry chapbook, Buttons and Bones, was published by above/ground press in 2021. His fiction has been shortlisted and received finalist or semi-finalist standing for the 2021 Autumn House Rising Writer Prize in Fiction, the 2020 Orison Fiction Prize, the 2020 Paper Nautilus Chapbook Prize, and the Faulkner Awards for a Novel-in-Progress. His prose has been published by Tulip Tree Press, Witty Partition, Zodiac Magazine, and other publications and has received honorable mentions from Glimmer Train Press. His poetry has appeared in Blaze Vox, Boomer Lit Mag, and elsewhere. He also hosts the podcast American Wasteland and writes a weekly prose poetry column for The Mountain Ear Newspaper. Joseph has an MFA from The Jack Kerouac School and lives in Colorado with his girlfriend and books.