Becs and I Imagine Little Things One Cold Night

Becs and I Imagine Little Things One Cold Night

1. It’s before dinner and Becs and I are on our MacBooks, her on the couch, me in bed. I watch endless videos on YouTube while she catches up on her reality shows through one of our streaming services. Occasionally I journey to the kitchen and pound on the walls to keep the mice at bay. Their scurrying subsides, for now. Outside’s a cold bleak one, the darkness enough to make you forget light of day was ever coming back. I turn up the heat a notch and return to the blue light of my computer. I think again on the mice, on the word “scurry.” S-C-U-R-R-Y. Nice. I imagine the mice don’t think about me at all.

2. Becs prepares homemade chicken noodle soup. My whole life I never much cared for soup, but now I’m 30 I appreciate the coziness of the steam rising, the crusty bread for dunking, the theater of it all. Mmm, soup, I say, slurping. I rub my belly in satisfied concentric circles. I speak up again after a few more hearty spoonfuls. I say: I hate to say it, Love, but this soup’s a little salty. Becs pauses. I know, she says, I know. She shakes her head, crestfallen. Sometimes she over-salts things. But that’s okay. I’m also an over-salter. Just last week I ruined the red sauce with my shaky hand. We all make mistakes. (To wit: when I got my first pair of eyeglasses, age 21, I let the guy upsell me on transition lenses. Big mistake! My friends laughed and laughed as I stood there, nursing a beer under a big fat orange sun while imagining I was somewhere else, my new frames shapeshifting hues like a four-eyed kaleidoscope out of geek hell. I wear contact lenses now.) Anyway, to lighten the mood we envision a kind of support group for chronic over-salters in which they can discuss their gastronomical transgressions in a supportive environment:

BOB: Hi, my name is Bob – and I just ruined Thanksgiving.

MODERATOR: Tell us what happened, Bob.


BOB: It was my job to make the gravy. They smothered everything in it–turkey, mashed potatoes, Aunt Linda’s famous stuffing. It was horrible. People were running back and forth for water all night!

MODERATOR: It’s not your fault you’re a lousy cook, Bob!

Becs almost chokes on her soup laughing. I’m so happy. We go from chaos to creation so easily.

3. Later I’m on the couch and now Becs is in bed. I flip through an old Moleskine journal, which my brief scan informs me contains a hodgepodge of half-baked ideas and semi-witty rejoinders.

A story about a neighborhood watcher, a nosy parker. The kind of person who is a nuisance to cops but a godsend to detectives–

Right. Okay. I don’t get it. Or do I? Maybe a drunk person wrote it mistaking it for sly brilliance, and maybe that drunk person was me. An imposter! Maybe I was just giving my mind a little workout to see what might pop off one day …

4. We go to bed at a reasonable hour. We have early starts tomorrow and it’s so empty outside. With the lights off Becs and I observe how crazy it is we don’t know what our friends’ lives are like when they’re at work. Do they clink away at a keyboard and consume “salad wraps” at their desks? Do they wear oversize suits like man-children playing dress-up in Grandpa’s clothes? We spent so many years enmeshed in each other’s daily motions but now do visits following prearranged dinners scheduled weeks in advance, like booking an oil change or root canal. Becs comes up with a concept called Take Your Friend to Work Day we believe would be a huge hit. I don’t think zoomers will be into it, though, she says. They’ll probably be sensible enough not to get jobs in the first place.

5. A few hours later I am still awake. Becs’s rhythmic breathing is joined by the pitter-patter of rain on the window. It sounds like the rain is scurrying. Like it has somewhere to be. I am under an absurd mound of blankets. From the warmth of my fabric fortress I imagine I am an incubating egg. I try to imagine what it would be like to have no blankets, no hot soup, no MacBook to kill the hours, but no image comes. 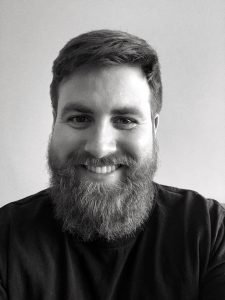 Benjamin Bengtson (@BenBengtson) is a master’s student in English literature at the University of Groningen, as well as a reporter coming from the wonderful world of community newspapers in British Columbia, Canada. He is currently based in the Netherlands.