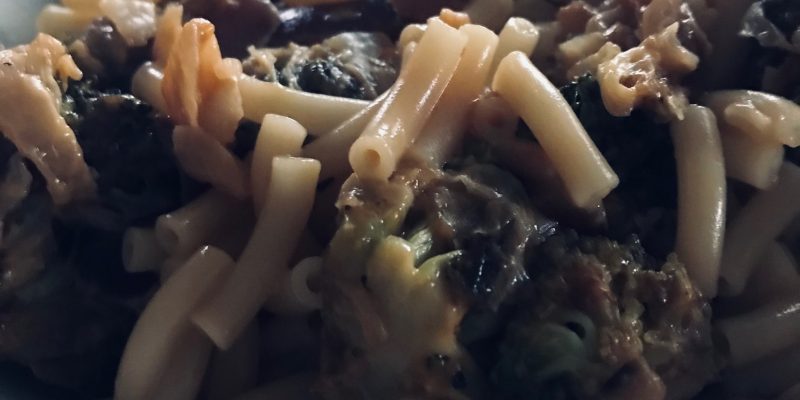 I don’t meditate or medicate, don’t take naps. I do scoop Knudsen’s cottage cheese out of the carton with a tiny spoon, as my mother tells me I did from earliest childhood—only Knudsen, always out of the carton—and feel the juddering timbre of everyday life subside. Food as comfort: comfort food. Anything with melted cheese and saucy tomatoes melts my angst: cheese enchiladas, lasagna, tomato soup with grilled cheese sandwich, cheddar or gruyere or both oozing out the sides of the bread. Chicken soup is universal comfort food, but macaroni and cheese is mine—from Kraft in the box to third-generation homemade infused with quantities of cheese (cheddar or gruyere or both) you’re better off not knowing, baked till it’s bubbly and crusty around the edges. I grew up somewhere between the two with Morton’s frozen, baked till it’s bubbly, the edges crusty. My mother presented it at the table unceremoniously in its foil pan so we could scrape out the last bits, chunky canned tomatoes with lots of black pepper on the side.

What constitutes comfort food is in the psyche of the beholder, the food itself inextricably linked to whatever its taste or texture or smell evokes—the people, places, or occasions, moments snatched from oblivion by a wafting breeze. Summer night fishing trips, cookouts at the beach: We toasted marshmallows on bent coat hangers, burned our fingers pulling the charred bits off the white-hot wire and onto a graham cracker, topped with squares of Hershey’s milk chocolate and another graham cracker. Who doesn’t love S’mores, warm, sweet, and gooey. Now there are S’more-flavored Oreo and Girl Scout cookies, cereals and Pop-Tarts, which conjure nothing, least of all that sense, however fleeting, that all’s well with the world.

My daughter just sent me a photo of her boyfriend and herself at Emmett Watson’s Oyster Bar, my favorite Seattle eatery since it caught my eye in a guidebook thirty years ago. Try the salmon soup, the book said, so I did and still do on every trip. Fresh, wild salmon poached in a savory clam stock, pungent with red pepper flakes and lots of crushed oregano, surrounded by a scattering of mussels lounging on their shells. And garlic. “Are you OK with garlic?” the server asked on my first visit. “The more the better,” I said. Garlic that all but shouts at you on its way from the kitchen and overtakes your senses when the steaming bowl is set in front of you; garlic aioli melting over a saucer-size crouton, diced bits of garlic infusing every spoonful. I found a Pike Place Market cookbook that includes the signature salmon soup, but this recipe calls for just two cloves of garlic and a quarter-teaspoon of oregano for four servings. No way. I showed it to one of the restaurant staff, who agreed it was a feeble imitation. “Go with your instincts,” he said. I adapt the recipe; it’s good, but it’s not the same. I suspect the missing ingredient is the place itself, the ambience, the city. Some things aren’t meant for home cooking.

A romantic dinner for two—mushroom soup, hearts of palm salad, wine-poached salmon. The recipes are from a newspaper’s Valentine’s Day feature, but when? The page is brittle and yellowed, parchment-like, tearing at the folds, with Rorschach-like brown stains. On the back is a horoscope for an unspecified period of time. My sign, Libra, advises me to slow down, nip illness in the bud, expect good news about an investment. There’s part of a crossword puzzle with clues for the puzzle but no clues about its source. I fish around and pull up scraps of memory from an extended courtship period in the ’90s, the four years my now-husband and I lived in different cities and saw each other only on weekends. I loved cooking for him and he was, still is, an enthusiastic and appreciative beneficiary of my efforts. I prepared the entire meal one cozy Saturday night during one of our first Februarys. The salad eventually merged into a litany of salads; poaching gave way to planked and pan-fried salmon. The mushroom soup remains in my repertoire, and I no longer need the recipe. Still, I keep this page, not buried in a seldom-opened cookbook on a high shelf, but on my kitchen counter in a giant paperclip with new dishes and reliable oldies: vegetarian chili and spaghetti carbonara, my favorite latke recipe and the gruyere-olive bread I keep threatening to make. I’m not a saver, not sentimental, or so I tell myself, but even the hard-hearted have our secret soft spots.

We met through work; I don’t remember his name, but I conjure a blurred image—solid build, receding hairline, nice eyes, pleasant demeanor. This was our only date. Was I attracted and hoping for more? Was he? Did one of us gently let the other down, or was it mutual? He didn’t do anything gauche; did I? Was it the artichoke? We had dinner at the Chart House, one of those intimate steakhouses that were cropping up. I still ate the occasional steak then but probably opted for teriyaki shrimp. As we ordered our entrees, he said, “Would you like to share an artichoke?” “Mmm, that sounds great,” I replied. The gray-green globe arrived in a shallow bowl, with dishes of mayonnaise and lemon butter for dipping, small plates for the leaves, said the server. As my date made a gracious “after you” gesture, I took a big bite of bread and waved him off: “No, you.” I watched him pull off a leaf, dip it in butter, scrape it off with his teeth, discard the leaf. I copied him. It tasted like . . . . like the mayonnaise or butter it was dipped in, bland in itself, but a novel eating experience. Until we reached the end. “You should have the heart,” he said sweetly. Was he trying to win mine? I stared at the round hair-covered mass; it looked like a hedgehog. I could have confessed. Would he be charmed or alarmed if I told him I was an artichoke virgin? But that wasn’t my style. In the false bluster and fearful insecurity of my early twenties, I had to act knowing, sophisticated, like a woman of the world. With a sigh and a moue I expressed my regret: “I’m so full already; I can’t eat another bite.” I watched carefully as he removed the choke and feasted on the succulent heart. I was ready for the next time. 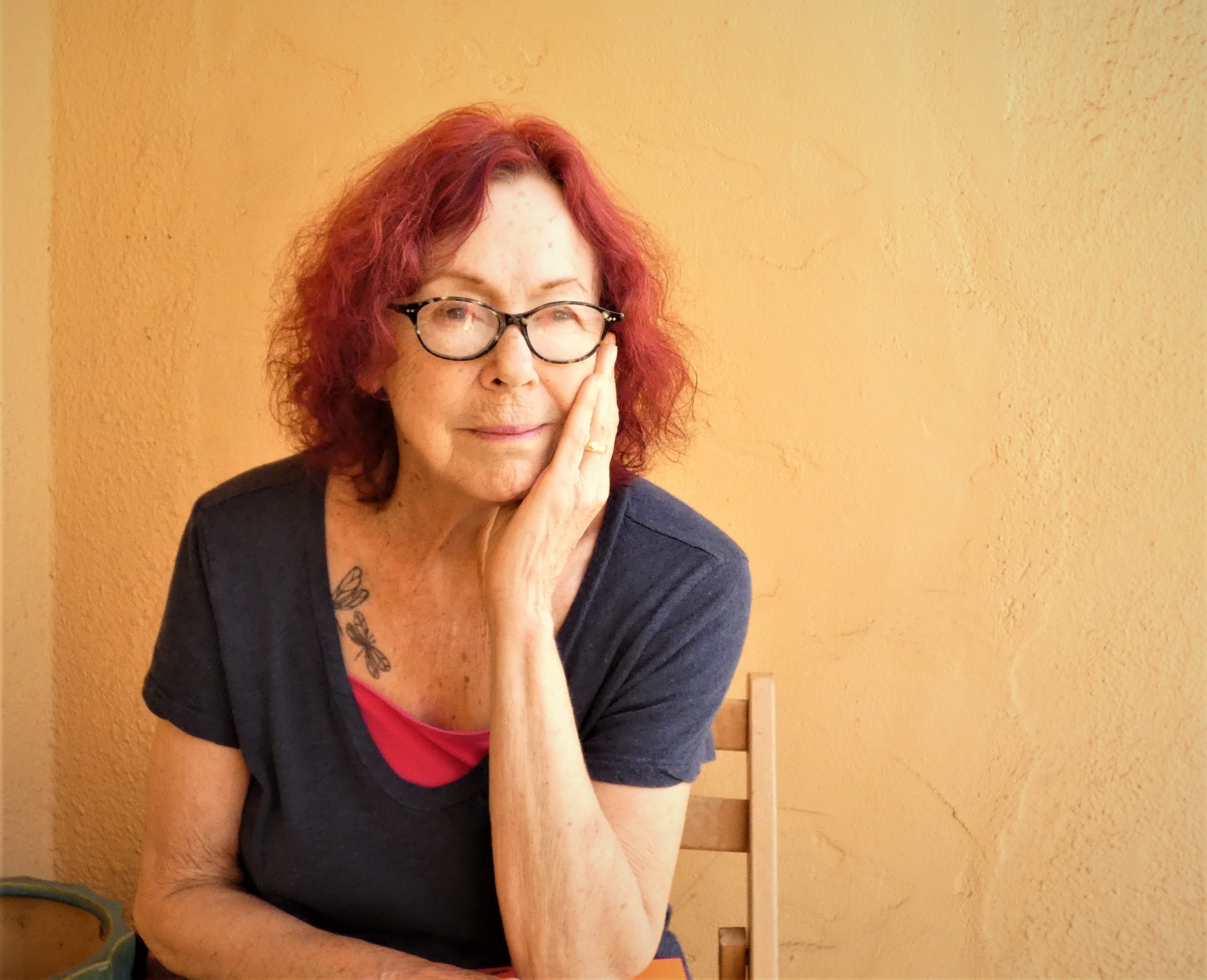