She finds a ring in her mother’s jewelry box. Inscribed “Arthur to Emily, 1-24-1942.” A dead-winter engagement, following a hasty enlistment after Pearl Harbor. Just a tiny, scratched ring. But platinum: a metal described in the encyclopedia as unreactive, noble, and precious.

How such a small thing could tell the story of a family. After the war, her father would return to the farm. Her brother would come, then Farm Girl herself.

Then an accident on the farm. Her father gone before she was old enough to remember his face. Her mother would remove the ring and never speak his name.

On the January wedding day, the bride’s sister stands at her left. The bride, the golden sister, is wrapped in light and ivory silk.

When it’s time for the rings, the silver sister, the second sister, holds the bride’s bouquet. Roses in winter in wartime. A small fortune.

“These are for you,” their father says afterward. He hands the sister her own bouquet. Carnations, the state flower. A few roses nestled among them, their petals still tightly curled, holding in secrets, waiting.

Her mother tells her they used to play with mercury in science class. The liquid gray slipping through their young hands like some impossible magic. She reads to the girl from Alice in Wonderland, says, Hatters’ hat bands painted with this quicksilver drove them mad.

Thermometer under the tongue: ancient remedy full of danger.

Mercurial: from sprightly, volatile, quick, like her brother who was always Hermes to her Athena. Her brother who was sent to fight someone else’s jungle war. Her trickster brother–messenger, bringer of dreams–who traveled to the other side of the world and returned changed (for good, but not for the better). Some ineffable thing flickering across his face like a summer storm over the alfalfa fields. He traveled and fought and returned silent, to drink himself into some kind of poisoned, sweet oblivion.

It had been her father’s truck.

“That Ford has a mind of its own,” says her mother. The truck has no engine, but every morning one July, it’s in a different place on the farm. A mystery. One day, it sits in the middle of the soybean field, its cab overflowing with wildflowers. An offering. The next morning, the truck is half-sunk into the pond, mud up to its rear axle. It looks like an elderly lady wading in for a dip, deciding how far to go.

On her mother’s birthday, the truck sits next to the kitchen, parked diagonally in the herb garden, a blue and white porcelain bowl perched on its hood. Her mother sits on the porch and cries.

The next day, she has one of the men chain the truck to the old oak tree. It looks like something wild and free brought to its knees. Trapped, domesticated, its headlights like sorrowful eyes, pleading for release. The girl goes to the truck and kisses its hood, burns her lips, licks them. Taste of metal: blood. Like her bitten tongue when the pony threw her off into a patch of borage. Flowers and stars before her eyes.

A label on the bottle in her mother’s purse: lithium carbonate. Pink capsules the color of birthday cake frosting. Hysteria, manic depression, bipolar disorder. The maiden aunt, silver-haired second sister, who drowned in the pond like Virginia Woolf. Her pockets full of stones. Two sisters, similarly afflicted. Farm Girl’s mother driving hundreds of miles to the city, any city, her pocketbook full of cash. Spending all of it, all they had, then spending more. Coming home with multicolored bags and hatboxes, a circus of color, a riot of tissue paper and cardboard, in the back windows of the Dodge. Different kinds of death. Debt: a near drowning.

Her first cigarette is a Pall Mall, stolen from her mother’s purse and smoked on the roof outside the bathroom window. From there, she can see the field sloping down to the pond. Fireflies, a blanket of tiny signals, a moving constellation. First breath of smoke makes her lungs constrict. Head spins. High, she’s heard her brother say. So high.

A ride to the bus station in the back of a pickup. A small bus, then a bigger bus, then a train. 48 hours later, the City. The new Penn Station, less than a decade old. Times Square, everything they said and also somehow less. A prostitute whose sheer red skirt stretches across her thighs like something anatomical. Neon signs: Nathan’s, Gordon’s, Coca-Cola. A Marquee: The Filthiest Show on Earth. Across from Port Authority, the Terminal Bar. Where people go for slow suicide. She wanders in and right back out. The man whose eyes–the whites–are yellow, making her think of eggs. She should have known then that she wouldn’t even last one season, that she’d reverse her migration in three short months, the train to the bus to the smaller bus, the ride in a pickup truck back to the farm.

When she returns, everything is cleaner. We have help, her mother says. Old farm equipment no longer sits in broken, accusatory piles. Her mother smiles when she says the boy’s name. Farm Girl can see he is more of a man.

A student at the university. Grew up on a farm. Hard worker, her mother says. He’s resting.

The boy, man, lies in the grass by the pond. It’s freshly mown. Farm Girl and her mother stand on the porch, gazing down the hill at him. This is like a scene from a myth; Farm Girl can’t remember which. She drains her glass of lemonade and steps off the porch, toward him.

A dead patch of grass by the old oak tree. The truck is gone. This is the man who moved it. These are the hands that will hold her body in sleep; she knows this as soon as she sees him. The hands she went looking for when she left on the bus, hands that make a vessel for her heart, which pounds blood to all parts of her in this moment, so hard she feels as if gold light is coursing from her fingertips and the top of her head. His skin aureate, browning, as he sleeps by the pond. A hat over his eyes, as in an Andrew Wyeth painting she saw in the city. She sees a gold ring, an engagement. Full circle.

Genevra MacPhail grew up in New England and Ohio. She holds an MFA in Creative Writing from Vermont College of Fine Arts. She teaches high school English and is working on a novel. She lives in Vermont with her family. 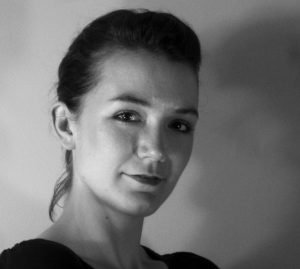