Mom leaves my door open, just a sliver, as a nightlight. She nestles a noise machine in the crack so I can’t hear the television. This is our nightly routine, a practice we have done since we moved out here three months ago.

When the dishes are done and the trash is buried in the yard, Mom and Dad turn the television on, volume low. They watch every night, once they think I’m dreaming. During the day, they don’t let me watch anything but cartoons and cooking shows. Mom says we should consider ourselves lucky that Netflix still works.

I can’t sleep, not with the moon so bloody and the clouds so burnt. Carefully, I slither out of bed. I want to watch the adult shows. I want them to know that I’m old enough to know more about the world and why we’re here now.

The hallway is draped with ghastly shadows, larger and wider than the titans who roam the city streets. They deter me, but I push forward, my elbows chafing from the rough carpet. I steady my breaths, crawling to the beat of my heart. I’m a soldier in the midst of the greatest, most dangerous war in American history. That’s what Mr. Cooper said on the radio last week. Mom wasn’t paying attention and didn’t notice when I changed the channel. When she heard his voice, though, she turned the station super-fast. “I don’t want to hear any of that,” she muttered.

The outline of Mom and Dad appears black as the night outside. They sit, unwavering. The edge of the television casts blues and yellows and greens and grays. I inch closer, now not breathing at all.

There’s an end table next to the couch. I hunker underneath, my hands crunched under my chest. My parents are glued to the couch, they watch in revulsion, cringing and gagging, like the images on the screen blast them backward, deep into the cushion, their organs twisting. I turn to see what they’re watching, and it’s the same show they watch every night. The news, the news, the news. I should hate the news. I used to when I was a kid. But I’m not a kid anymore. I’m sixteen years old and I want to know what’s going on.

On the screen, a man’s head is practically ripped in two, like someone, maybe one of the Giants who came from the stars, grabbed his cheeks and pulled them apart. He’s lying on the street, blood pouring from his eyes. A sign leans behind him with spray-painted letters spelling out: We seemed like grasshoppers in our own eyes —Numbers 13:33. In the background, a Giant stands, reaching, reaching for the man. I should leave now. I shouldn’t have come out here. It’s too scary. It’s too—the image changes.

A woman with short gray hair and crystal eyes stares at the screen. She opens her mouth to speak, but only her lips quiver. Someone behind the camera says, “Rachel, we’re on,” and she straightens in her chair.

“The end of the—” The TV shuts off. The noise machine in my room silences.

“You don’t think they’ve made it out of the cities, do you?” Dad asks. “They said to leave the cities, that they were coming to the cities.”

“I don’t know, Al,” Mom answers. “But we need to get Benny out of here. Pack up our shit and get the hell out of here. We have to protect him.”

The house begins to shake, first almost like it isn’t, and then with every passing second, harder and harder. We three stay still.

When the shaking finally stops, Mom gets up from the couch and Dad does too, their outlines now blackest among the black. I get to my feet and follow them as they walk.

“You don’t think I want to protect him?” Dad asks.

“Stop being stupid.” She opens the back door and takes a deep breath. “I just want him to have a normal life, Al.”

The night air is hot and humid, sticky on my skin. Dad steps onto the deck he built last summer, back when I still went to school and the Giants didn’t exist. Mom flicks the switch next to the door and of course it doesn’t work.

“Too late for that,” Dad says.

“What’s that supposed to mean?”

“This isn’t new, Barb. You’ve been babying him his whole life.”

“Babying him? Al, he’s fucking brain-injured. How the hell am I supposed to be? I’m his mother.”

I sneak behind them. I leave the door open just a crack, just in case. Mom turns to see me and sighs. “Shit,” she says.

They don’t think I understand them, but I do, I just can’t articulate it. I open my mouth to try, because I always try, and then, in the distance, in the trees, I see it.

A Giant. It stands, the bloody moon hidden by its shoulder. The trees surrounding the house begin to float, their roots twirling into one another. A tornado forms to the Giant’s left, ice and fire and moss and rock twisting, twisting. Mom grabs me by the arm, starts to run, but we’re stuck. She screams. No sound comes out of her mouth. Bit by bit, strip by strip, her skin peels off her face and flies towards the tornado. My fingertips start to unfurl into the universe. Dad sinks, his arms flailing. He’s desperately searching for something to hold onto. But he vanishes, his head sinks beneath splintered wood.

Mom drops to her knees. Where her face used to be, blood flows freely down to her neck. The Giant plucks her off the deck and I yell. For a moment the Giant seems to consider my plea, but then it drops Mom into its mouth.

I want to run. I want to get back into bed where the noise machine protects me from the world and the television is nothing but static. But it’s too late. The Giant squeezes my head in between two fingers and lifts me up. There is no pain, only a pressure so tense I feel like I’m going to explode. I dangle above its mouth, and I see nothing. There is a sea of nothing, and I realize that is what the world really is. A void.

He drops me and time seems to stop. I’m swimming now. There is no island, no boat, no anything, not even stars. Just me. My brain starts to unravel, and for the first time in my life, I can speak, I can let the words dribble out of my mouth and I say, “No. No. No. No. No. No.” My bones crunch under the Giant’s teeth. I can hear what Mom screamed before it ate her. She screamed my name. Because she had to acknowledge that I understood the world now and why she kept me from it.

She was right. I’m not ready to know all these things.

But dad was right too. It’s too late for that now. 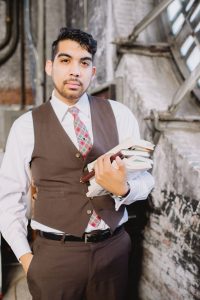 James Harris is a Black, Mexican, and White writer who writes speculative fiction with a literary twist. He currently resides in Kansas City, where he contemplates the dreadful, the macabre, and the end of all things sacred. Find more at jamesharrisstories.com.