One in a Million

One in a Million

My husband died from a heart attack while cycling.

His death confused me for a long time. In the days afterward I would go for long walks along the road where it happened. The narrow road, houses on one side, sea on the other. I could see the neighbors behind the curtains. Withdrawing when I passed by.

It’s good she’s getting out, they would say.

I need to see it, I wanted to shout at them. Maybe there was something there, some sight or sound that would explain why a healthy, forty-year-old man could have a heart attack. Maybe something surprised him or made him fall, an uneven bit of pavement, maybe; a badly parked car. But there was nothing. Just a road.

I remained in the cottage. We were only meant to be there for a week. They said I should come home, get back to my life. See my friends, family. Start to rebuild. It’s not good to stay there on your own, they said. Not healthy.

We tried healthy, is all I said.

The doctor wanted to hang up long before I let him. He didn’t understand. I knew what had happened. I wanted to know the cause. I needed to know what to blame. There must be something, some hidden gene or defect we didn’t know about. I could get on board with that, could understand. But there was nothing. I could hear the shrug in his voice before I hung up.

These things happen, he said.

I read up on it. I sat at the table in the cottage for days, the light of the laptop screen brightening and darkening with the rising and setting sun. I read obscure Wikipedia articles with long words and confusing Latin names. I read about risk factors. Obesity. Smoking. Poor diet. None of it made any sense, none of it applied to him.

What about when you did everything right?

I kept his bike.

People asked me if I wanted to get rid of it. Sell it, give it to charity. Even bin it. They stood in the front garden, gripping the handlebars, as if they wanted to wheel it right out of my life.

I’m keeping it, I told all of them. Maybe I’ll ride it myself.

They never knew what to say to that. I didn’t mean it. I didn’t intent to ride it, I mean. But I couldn’t get rid of it, when I didn’t know how to feel about it. I would look at it through the window, alone in the garden. One gusty night the wind caught it and took it halfway across the grass. When I woke the next morning, it was spread-eagled on the lawn, tufts of grass poking through the spokes in the wheel. After that, I brought the bike in, kept it in the bedroom. I propped it up against the drawers. I would look at it before I went to sleep. I wanted to speak to it, ask it questions. Did it know something I didn’t? Some secret about what happened? The little light on the front glinted at me in the dark.

It was a waste of time, wasn’t it, it would say to me. All that keeping fit.

I couldn’t disagree with that.

His phone was handed back to me. The screen was smashed, long splinters echoing outward from the point of impact. I went on the app he used for all his fitness. There was a record of his last bike ride. I could see his pace and his speed, an undulating wave of his circuit around the bay. Then it stopped abruptly, halfway down the road. His pace stopped dead, plummeted to zero, and didn’t get off the ground again.

I stopped walking along the road. I walk along the beach instead. There are steps down from the road, lashed with seaweed from high tide.

Some of it’s sandy, some of it rocky. There’s a fair bit of scrambling, jumping over rock pools, sliding over the wet rocks. What are the chances, I think, that I could slip and bang my knee, twist my ankle, break my neck? High? Low? Would there be a way to figure out, to get some scientist down here with charts and figures. She could tell me, one in a hundred, a thousand. How many scientists would I need to tell me the odds of it all, every unlikely fatal event that I skip past every day. Struck by lightning, hit by a bus, eaten by a crocodile.

How many scientists do I need to tell me why, though?

Sometimes, on my new walk, the waves wash over my feet. The water goes through my shoes no problem. After that happened a few times, I would stay in. The waves broke over my ankles, and every bone in my feet ached with the cold.

It’s that time of year when it’s not really autumn and it’s not yet winter. The wind is stronger and colder. The waves that wash over my feet do it with renewed vigor. Sometimes the sea goes as high as my knees. As the wave withdraws I can feel the tug on my legs, the longing with which it tries to drag me out. Freezing, numb, blissful oblivion.

One in a million, someone said.

I overheard that at the funeral. At the wake, afterwards, holding a plastic cup of warm white wine, standing next to the stale sandwiches. I think it was meant to be a comfort to me. I have been thinking about it a lot. It doesn’t mean much, I decided. I suppose it does, to the nine hundred and ninety-nine thousand, nine hundred and ninety-nine. If you are the rest of the million, I would say that. It’s all academic, just a statistic. But I was the one. Or, I should say, he was the one. I was left.

On the beach, I stopped to watch a father and a child. There was a storm, the radio said. The sea threw itself against the rocks and the pier, determined to rip them down. I watched them, standing on the sea wall. The child laughed every time a wave hit the wall, the spray rocketing upwards. He shouted with glee every time the spray spattered over their faces.

One big, stormy wave, and the child would be ripped from his father’s hand and taken by the sea. What are the chances, a freak wave like that?

One in a million, probably.

I wanted to shout out, drag them back. But I’m sure the father knew what he was doing. I turned around and walked home. Back to the cottage, anyway.

The storm subsided, but the waves remained. Iron water under an iron sky. I went into the water, not just allowing it to wash over me but crouching down until it rose to my chest. Everywhere the water touched burned with cold. Weeds draped over my bare hands, and my ankles and knees scraped against unyielding rocks, hidden beneath frothing surf. When I pulled myself out, bloodstains blossomed through my soaking jeans.

In the cottage, I sat at the table, still in my wet clothes. Fighting a battle with my body to stop shivering. My fingers found a pack of cards. I thumbed through them. We had been playing with them the night before it happened. I shuffled them, two halves snapping together with a sound that cut through the quiet. I once read that when you sort a pack of cards, chances are they’ve never been shuffled before. The chance of me sorting the cards into that order, whatever it was, was so small as to be almost impossible. Unthinkable. But it had happened.

I never planned to do it that day. The waves were strong, surging over the rocks and splashing on to the road. I was on my walk. The approaching waves tickling the edge of my shoes. With no plan, I stepped into the sea, dragging my feet, fighting against the current. First my knees, then my waist. I held my breath as a wave broke over the top of me, embracing every pore of my skin in its grip. I half walked, half swam, until my tiptoes were clear of the sandy bottom. I gasped, fighting to keep myself afloat among the waves, my soaking clothes dragging me down. Another wave crashed into my face. I could hear a voice, some distant shouting, from the shore. Shouting at me. I knew it was dangerous, stupidly dangerous, to go into the sea like this. Anything could happen.

But, really, I thought, what are the odds? 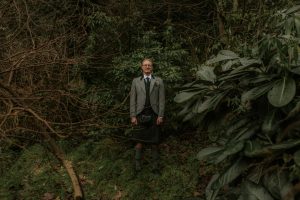 Dan Richardson has been published in Typeslash Review, has been writing fiction and poetry for several years, and has completed a creative writing course at Strathclyde University. He lives and works in Glasgow with his wife and dog.