He was, at his core, a storyteller, an adventurer who forged an unlikely chain of experiences and built them into tales, and if you gave him a moment passing in the clinic hallway, he would pick up the thread of some small recent event and begin to spin it out into a fantastical web, branching off in three different directions, dropping a plotline, picking it up and dropping it again, merging a couple of completely different streams of thought, loop-the-looping back to the beginning, for example, the disaster that everyone said last night’s dinner was, though of course he didn’t agree with them, chicken being the one ingredient you can vary almost infinitely without ruining the situation,  which led into how he was able to sweet-talk a state trooper into letting him keep his tent pitched on the Amtrak embankment for the entire month of September, where he was able to tame a family of raccoons until one night they didn’t recognize him and that’s why he came in all scratched up that time, then a short bridge from abrasions to this amazing blues guitar lick he was working on that some dude showed him fifteen years ago and recently came back to him in a dream, reminding him of his favorite Kurt Vonnegut story, which you absolutely had to read, ramping into a wild leap recalling the gracious but opinionated old lady down the hall, who had been a model for Vogue back in the fifties and who practically compelled him to type up urgent and convoluted letters to the FBI, which she spent hours dictating to him, something to do with chronic fungal infections, the source of which he was sworn not to reveal, trust and loyalty being important things to maintain, but so were guitar pedals, simply amazing the absolute steals you could find online if you were patient, careful, and willing to tighten them up a bit, and another important spot was the courtyard behind the old Barbara McInnis House on Walnut St., where you used to be able to sit out and be at peace with the soft spring air and a cigarette until the nurse yelled down from a third-floor window that it was time for everyone to come up and get their meds; and if you had time to this point (and you never had enough time) you would be wondering where on earth was he going, how could he possibly bring these meanderings to a closure, but if you hung in, he would always find the one original thread in the middle of the tapestry and tease it out again—Yes!— of course the kitchen staff, like all the staff (with a few notable exceptions) worked really hard, did their best under crazy circumstances, and some people had hard lives and were just too broken to appreciate what a decent meal was when it was set before them, or maybe they just got tired of the chicken cacciatore, something like that, with a wink and a shrug, deftly bringing the story back home, a highwire act teetering between the mundane and the impossible, and he danced along it with such confidence and grace that you just wanted to stay and listen to see exactly how he was going bring it around again, just to admire the way he would somehow keep his narrative balance, which he almost always did.

Except when he fell.

And when he fell, he fell hard.

But he never stayed down long, picked himself up and willed his way through detox, shook off the demon dust, made apologies where necessary, set his body to heal, and took up the adventure again, refocusing his energy, most recently into the business of applying for an apartment, which required an almost superhuman effort at patience, filling out stacks of eligibility forms, cleaning up legal loose ends, looking good for the interviews, waiting for the landlord to make repairs, waiting for inspection, waiting just because nothing seemed to be happening for a while, always with good humor, confident that it would work out in the end, making sketches for how to furnish and decorate the place, how to organize his days once he was settled in, and finally his patience was rewarded and he was able to move in, and things seemed to be going well for a couple of weeks, until he fell again, dashing his head against his newfound coffee table.

And this time he didn’t get up.

But the amazing thing is, he had still brought the story home again, one last time, to his home, the home he had waited for, the home he wove together.

And he was happy there. 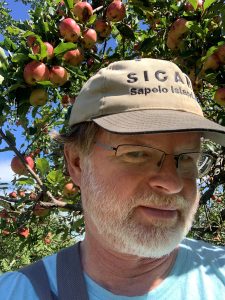 Robbie Gamble’s nonfiction work appears in Pangyrus, Solstice, Scoundrel Time, and Tahoma Literary Review. He worked for many years as a nurse practitioner caring for people caught in homelessness, and he now divides his time between Boston and Vermont.