When I was a kid, I watched too much TV.

Even though I went to the Waldorf-based Rudolf Steiner School, where it was recommended that children watch no TV, my parents let me watch whatever I wanted on our Zenith 25-inch color console. Sesame Street and Zoom, when I was little; Medical Center and Maude as I got older.

I remember all the classic 1970s lineups. My favorite was Friday night:  The Brady Bunch, The Partridge Family, The Odd Couple, Room 222, and Love American Style. I was an insecure child, and somehow I managed to tie up my identity with that of Marcia Brady. If I looked like her and had her hair, everything would be better.

Not that things were bad. They weren’t, but my house felt different from those of my friends. My father grew up in the Bronx, but his parents came from Russia, after World War I. My mother’s family was Ukrainian and had lived through World War II. They first settled on the Hudson, in Nyack, then moved to Sea Cliff, on the North Shore of Long Island. My grandparents lived there with my mother’s sister and my great-aunt.

I spent the first eleven summers of my life in their house—my mother wanted me out of dirty, smelly Manhattan—and when I was around four, my grandfather told me I could watch “See-sam Street.” I still remember the little interlude films that told a story without puppets, like the one about the ball going down the chute, or my favorite, the children trying to retrieve lost change from a storm drain.

These gems were mesmerizing and took me away to a world where all I had to do was watch a ball travel along a track or coins being washed by rainwater. How relaxing, in contrast to listening to my family sitting around the dining table discussing something that happened with the Gestapo. What did that word mean?

Since Marcia Brady probably didn’t know the meaning of this word either, I identified more with her, especially since my mother was always telling me, “If anyone asks, you are an AMERIcan.” This was, after all, the height of the Cold War, and my mother was employed as a typist at the United Nations. Much more fun to concentrate on Marcia’s teenage problems: her blond, straight hair and her sunny California lifestyle. When I watched TV, I was completely ensconced. I was in whatever show I was watching to the point of complete absorption. I was one with Marcia.

The later years included multiple reruns of The Honeymooners and The Odd Couple on my own TV, a black-and-white Zenith that I could watch in my room (which was really my parents’ bedroom. I didn’t have a room of my own). Was there anything like the cardboard set of Ralph and Alice’s apartment on The Honeymooners, which would shake when Ralph slammed the door? This was the first time I heard the names of streets in Brooklyn, the far-off land that would one day become my permanent home. Or the absurdity of the Oscar-Felix friendship in The Odd Couple, which made me occasionally ask myself, “Am I an Oscar or a Felix?” In college, I even tried an experiment: to live like Oscar for a week, putting away nothing and, consequently, not knowing where anything was. I only lasted two days. Things got eerie when I attempted the deeper and more disturbing Twilight Zone, with Robert Redford playing death, or the scariest train ride ever, the one that begins and ends in a town called Centerville.

Ultimately, I needed a break from TV, and later in my freshman year I simply turned it off, saying goodbye to Luke and Laura on General Hospital, the then-current obsession I had succumbed to. There were certain kids I would meet over the years who had grown up without a TV in their homes and I had convinced myself that they were superior, somehow more intelligent, and less superficial because they didn’t rely on whatever the current TV trend was.

Around this time, I also became concerned that I had spent way too much time succumbing to another household obsession: black-and-white movies. It even came up in therapy one day; maybe I was addicted. The therapist asked me a couple of questions: “Are you prevented from doing other things because you watch movies?”

“Are you not participating in any daily activities because of movies?”

“Then you don’t have a problem,” he told me. “Everyone needs a healthy escape.”

That was such a helpful answer; these days TV and I are good friends again, although my little Zenith black-and-white is long gone. TV is there when I come home from a stressful day of teaching and need a complete escape into another world (much like the children I teach). Also, TV has gotten so good again, recalling the early days of 1950s dramas like Playhouse 90; I’m still making references to episodes of Mad Men, Justified, and Longmire. And for sheer Greek drama, is there anything like The Sopranos?

Ultimately, I am grateful for the escapism of top-notch TV, but there is something else. There wasn’t a lot of storytelling going on in my house when I grew up. Perhaps surviving Stalin then Hitler was too painful; maybe it was easier to stay silent.

Maybe TV, at its best, isn’t as superficial as I once thought it was. As a child, I craved stories I saw on TV. They made me think; sometimes they made me laugh. As an adult, and now a writer, I have grown to understand the power of storytelling as a way to make sense of the world around me. And the good shows have great writing, which equals excellent storytelling. 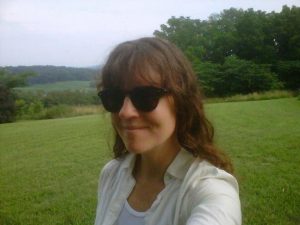 Anita Bushell is an author and native New Yorker. She is about to release an object essay collection, is working on a set of noir stories, and is in the final stages of her first novel.