“If you can guess what I’ve got in my pocket, it’s yours.”

The guy’s new at the gym; at least I’ve never seen him before. About sixty, maybe. Baggy green sweats, gray hoodie, glasses with short temples cocked up toward a thin roof of peach fuzz. Judging from the others glancing our way, I’m probably not the first to hear his pitch, which he makes while jostling the front pocket of his sweats. I force a smile and head toward the treadmills.

Some bouncers from the Jolly Gent swap stories between loud thuds of laughter.

“Guy kept sayin’ he was at Lipstick Cabaret. Kept telling me he was gonna turn me in to Jake or Ron or somebody and I was gonna be ruined for life.”

“I know, right, you’re earnin’ your keep, ’specially with the dollar draws and shit.”

Two quiet and seriously ripped dudes huddle around a weight bench. One of them chugs some cloudy blue shit from a mason jar. The other loads at least three hundred pounds of hard rubber disks onto the bar. He sucks in a huge breath, holds it a second or two, and lets it out. He repeats this several times, his cut-up T-shirt a rise-and-fall display of GUNS DON’T KILL PEOPLE, PEOPLE WITH MUSTACHES KILL PEOPLE. He rubs his mustache and plops down on the bench.

Pocket Guy approaches two women on ellipticals. He gives them his spiel. They glance at each other, smile, and pick up their pace.

The guy getting on the treadmill next to mine turns his playlist on. “Forgot my earbuds today. This gonna bug ya?”

My voice bounces with me. “No, Lil Nas is good. It’s Vivaldi I can’t get with.”

After a few more brush-offs, Pocket Guy seems to give up the guessing game for some other conversation I can’t make out. He takes turns on a few machines.

After finishing on the treadmill I wipe my face with my ragged ex-bath towel and pull on my own hoodie. Pockets gets off a leg machine and approaches me once again.

He chuckles. “You know they’re working on all these things that are gonna keep us alive no matter what, ain’t they?”

“Yeah, I suppose they are.”

“Working on some mighty great stuff, yes sir.” He turns and shakes his head. “Would’ve been nice about ten years ago. Something good for fixing holes in livers and lungs. And for people saying shit about being in the wrong place at the wrong time.” A pause. “He’d be twenty-six now. Hauling me around town and still arguing with me on all sorts of subjects. And she might have stayed with me.”

He pats his pocket, and I notice that he’s missing part of a thumb and part of an index finger.

“One of these days,” he says, “they’re gonna fix a few of those things, but the rest of them will still be with us.”

He stiffens up, swallows heavily. His eyes hang, heavy stones under the white, ragged clouds of his brows. Too predictable? Too cold, mechanical?

“Thank you,” he says in hushed sincerity, and pulls a pair of hand-size tin snips from his pocket, along with a white washcloth. He raises the shiny, deadly-looking blades. “All for you, my friend. Only the third stranger in this whole goddamn town. The third who didn’t either run off or call for help because they were frightened for their souls. But you’re no stranger now.” He stuffs the cloth in his mouth and bites down hard. A hearty squeeze triggers a muffled howl, and part of a middle finger falls to the floor and rolls a short distance, trailing a broken line of red wetness.

There are screams. People scatter, but I’m rooted where I stand. The snips clang onto the floor as the altered man takes the washcloth from his mouth. With a string of deep groans he holds it in place as every red, penitent pulse marks crimes past and future—the things he’d done to himself in place of those he’d do to others.

“It’s okay,” he pants, heavy sweat streaming down red, quivering cheeks. “You’re on track, more so than others, even if you couldn’t make it stop.”

I wasn’t the clairvoyant, but I was among the special ones. Because when you say the right thing at the right time, there’s bound to be a transaction, for whatever it might be worth. The altered man keeps his eyes trained on mine. A smile spreads slowly across his face like a fresh spill of liquid on fabric. 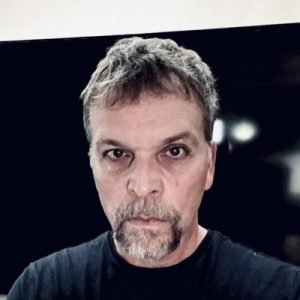 F.M. Scott is from Tulsa, Oklahoma, where he lives and writes. His stories have appeared in Apple in the Dark, The Horror Tree, The Killer Collection Anthology (published by Nick Botic Horror), Sirius Science Fiction, The Tulsa Voice, and The Rock N’ Roll Horror Zine.