She’ll never admit it. No matter how many times you ask or allude to it, she pretends it never happened.

Do you like this coat? she asks. It’s three hundred dollars, she says.

She texts you a picture of a heavy black wool peacoat with quarter-size silver buttons. A new coat isn’t something you need, though.

Do you want anything else? Another pair of shoes? she offers.

You could find some shoes quickly, if she twisted your arm. You flick your fingers aimlessly across the websites of your favorite stores on your phone.

These are nice, she says, texting you a link to a pair of black boots with shiny gold buckles on each side. These are only ninety-nine dollars, she says.

You reply no thank you, sweep your eyes across the screen, search for a sensible pair of flats–something to keep you on solid ground.

You remember the day she came back. She pulled into your dad’s driveway to pick you up and take you shopping. She drove you and your sisters around in a white car you’d never seen before. You’d been waiting for this moment. You push a plastic cassette tape into the car stereo and say: I wrote this song, but she can’t hear you. She isn’t listening. She turns the stereo volume knob down to the left and talks about other things, her eyes empty and fixed straight on the road ahead.

When she came back you wanted her to see you’d changed too. Your hair was longer. You’d grown your bangs out and started splitting your hair down the middle–your dad’s family in the deep Florida South calling you “Jesus hair” instead of calling you by your name.

When she came back you’d transformed too– maybe grown a little taller, small breasts beginning to bud under your white baby tee with the Weezer logo, after lagging behind your sisters–finally. You’d never needed a bra before, but you’d begged her to buy you a training bra when you were in the third grade so you could be like the other girls.

At least I had pubic hair when I was twelve!  your stepdad had shouted at you through a closed bedroom door. He’d barricaded himself in the master bedroom for days–your mom’s dresser pushed up against the inside of the door so no one could get in. The weeks before she went away were chaotic, turbulent–a mess of clothes on the floor.

When she came back she took you and your sisters to the mall.

You can pick anything you want, she says. She doesn’t have a job. She has a new friend named Gary and she’s using his credit card.

When she came back there was a blankness about her. She was there–she was looking at you–but it was like she couldn’t process what you were saying, or maybe she didn’t care to–you couldn’t tell. She was like a Stepford Wives mom or a Real Housewives of [your state here] mom. She had no substance. She was a shell of her former self.

You weren’t there when she went away. You were spending the night at your friend Michelle’s house–again. Michelle lived with an older man who wasn’t her dad–you didn’t know what he was in relation to your friend. He had a house filled with cats that smelled like piss, but you felt safe there even among the urine-soaked fabrics and crunchy litter-covered carpet.

You need to come home. Your sister had called you on your friend’s landline.

When you came home she was already gone. Your dad was there instead. He told you and your sisters to pack a bag quickly. Don’t forget to grab a towel, he’d said.

You looked at your bedroom, saw the white frilly bedspread, white vanity table, white walls–the slanted A-frame ceiling that made the room look like an attic. You loved this room. You’d only lived in it a few months, but it was your favorite bedroom of all. But all you’re allowed to pack is a towel and a few things you can quickly stuff into a bag.

You watched the apple-green two-story house disappear through the window in the backseat of your dad’s Bronco, colors beginning to blur outside the glass like blobs of watercolor paint as the car accelerated away, leaving one state for the next.

When she came back there weren’t hugs and kisses–there were shopping trips and unfulfilled promises.

I’ll pay for your nose job when you graduate, she’d promised.

She’d categorized you and your sisters from the beginning, classifying you like flowers as you began to blossom and turn your petals to the sun, morphing into unique individuals and displaying your strengths and weaknesses to the outside world.

You’re the smart one, she’d said to you.

You’d rather be called the pretty one, but she’d crowned your little sister with that title.

You and your sisters can remember her return clearly. Your brains are bonded by memories of her coming back, leaving again.

In your memories, she was returning for you, to pick you up and bring you back to the life you’d had before. She arrived at your dad’s house, both wrists braceleted in white gauze bandages, her face cast with a smile that didn’t match her eyes.

In your memories, the room is a standard hospital room with two adjustable beds slightly smaller than twin-size mattresses. The room had its own bathroom and a window that covered the wall and faced the door. Your mom sat on the bed. She smiled at you and your sisters and acted like everything was the same as usual.

She bangs her head on the wall every night, she’d laughed, describing the woman who shared the room with her. It was as if she wanted to lighten the mood, make you comfortable, help you understand she didn’t belong there. She was different! These people were not normal–but she was.

Do you remember? You desperately want to ask her.

Why were you there? What was your formal diagnosis? You wonder obsessively, curious to know if you have the same afflictions so you can manage them–be in control of the trauma trapped in your body.

But she won’t admit anything. In her memories, it never happened.

Pick something nice for your birthday, she texts. 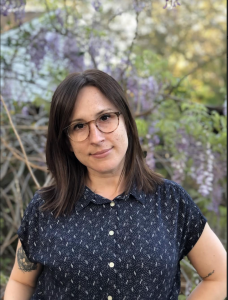 Kim Weldin is a writer from Charleston, South Carolina. Her work has appeared in Maudlin House and 3Elements Literary Review. She is currently working on a short story collection.