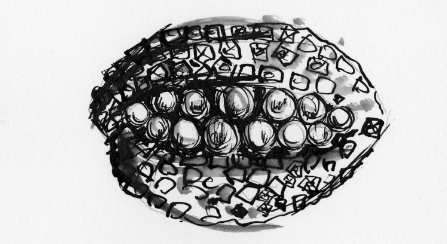 Audio: Ivy Goodman reads "Which One"

Jane Smith was the older sister by three years.

Linda Smith had metastatic cancer, and her reconstructed breast was blind, so to speak, because she hadn’t bothered with the tattooed nipple.

They both were married, two grown children each. They lived in separate northern towns, hundreds of miles apart. Their widowed mother, they’d decided, would stay in the nursing home, here in West Palm Beach. They would leave their mother, but they would be back, wouldn’t they?

Just then, as they sat talking over coffee, the topic was their mother’s hair.

When Linda’s cancer recurred, they’d agreed not to tell their mother. She knew about the first diagnosis but probably had forgotten. Initially, Linda planned to live without a breast, but the prosthesis made her sweat so. Then she decided that she did want another, or at least a semblance, a swelling, a poppet. Before she had a chance to get the nipple, cancer was in her bones.

“Did you notice?” Linda asked. “Mom hardly looked at us.”

During their mother’s last crisis, in the winter, Linda had been sick too. Or when was it? Florida confused the seasons. They’d realized that their mother couldn’t keep on living in her house, that she needed constant supervision. When Jane arrived to move her out, all her jewelry was lost. Had their dotty mother forgotten she’d given everything away? Thrown it in the trash? More likely, she’d been robbed by people paid to help her. Everything was gone, regardless, none of it lavish or exquisite but still valuable as gold, precious stones, and mementos of a woman’s life. Linda, on rounds of chemo at the time, didn’t care. But Jane blamed herself and needed psychotherapy. Yesterday, browsing in the shops after lunch, Jane had turned from a rack of dangling earrings affixed to little cards, her expression penitent, even anguished. “You should know,” she said. “I only wear silver costume jewelry now, never real gold.”

They both loved their mother, but there was only so much they could do. Linda had her cancer, and Jane had mourned already, through the jewelry.

“Sometimes I wish Mom and Dad had stayed up north,” Linda said.

Jane said, “When I come down, I always save my mornings for the beach. They loved the climate.”

“Is it cold in here?” Linda wrapped her cardigan more tightly. “Or is it me?”

Shades lowered the length of the coffee shop’s glass walls deflected the glare and the heat from outdoors. A draft came from high up in the black ceiling, amid duct work, pipes, sprinklers. The floor was concrete, the chairs and tables of heavy wood trimmed in metal, hard surfaces that amplied the grinding of every demitasse.

“I know it’s noisy,” Jane said, “but the coffee’s good.” She tapped her cup with that familiar gesture, hands hovering, fingers splayed, as if her nail polish were forever wet. Her cleverness had always been physical and more dramatic and expressive than anything she might say. Wry smile, arched brow, one slender foot swinging in its high-heeled sandal. She was the sexy one, persistently sexy in late middle-age, as if for decoration, like the low scoop of everyday cleavage. In her boy-crazy years, she would sneak out the cellar stairs, and from within, Linda, the little sister, her accomplice, would shut the heavy door, swollen from humidity and decades of varicolored paint. To gain momentum, Linda first had to open the door wide, letting in the dark, the damp, the smell of wet earth and humus. The door had a window covered by a crooked old venetian blind. When Linda shoved hard so the door would catch, the blind shook away from the glass, and its loose, laddered slats twisted for an instant into something like a double helix or a piece of garish jewelry that needed to be cleaned and restrung. The blind thudded and went still. An empty flowerpot lay on its side, crusted with dirt. It was a fallacy to say the dead left. The living left. The dying couldn’t come along.

“You’re still so pretty, Jane. You are. Oh, listen, you’ll like this,” Linda said, smiling now. “A few months back, my good friend’s husband saw your photo at the house. He called you a ‘babe.’” Linda didn’t confess that the photo was an old one or that the man had recently died.

“Isn’t he nice.” Jane’s right brow arched more skeptically. “I meant to tell you something too. I had a check-up the other week. So I’m waiting, sitting on the table in that gown. In walks the doctor and hugs me.”

Jane shook her head. “Not to worry. It was a different Jane Smith. Double mastectomy. Awful, isn’t it? Our records got mixed up.”

They both said nothing then. Linda felt a phantom pinch in her reconstructed breast, the breast without a nipple, because the sensory memory felt that real. What if the biopsy needle had extracted normal cells instead? She was spinning in time, listening again to her doctor on the phone. She’d never once thought, they’ve made a mistake. She’d thought, my suspicions were correct. After all, she was the one who’d found the lump. It was too late to wish she’d never had cancer. She just wished it hadn’t come back.

If her flight went down on the way home, she’d be spared the suffering ahead, except she didn’t want to kill the other passengers and crew. No one was more or less mortal than anybody else. Her healthy husband threatened to die first all the time. He could have a heart attack, an accident. He could be shot by a madman or run over by a bus. But then he’d hug Linda tight and vow she’d get enough morphine at the end because he knew she was afraid. Conjecture was a children’s game: I am, and you’re not. Right then, Jane was going to live. Jane was lording over life, like the stronger of two small girls sitting close, elbowing and kicking for space.

Jane said, “I shouldn’t have told you.”

“You were almost like me, but you were saved,” Linda said. “Do you know if hers had spread? Her surgery would have been twice as hard. But what if she was mixed up from the start, if not with you then with some other Jane Smith, sort of like a double-cross? There must be thousands of you.”

Jane gasped. “Oh, god. They can’t give back her breasts.”

“They can give back her life,” Linda said. “Or they can try.”

Ivy Goodman’s short ction has appeared in Five Points, Hobart, storySouth, Washington Square, and other U.S. literary magazines and anthologies. Her two published collections of stories are Heart Failure (University of Iowa Press) and A Chapter from Her Upbringing (Carnegie Mellon University Press).